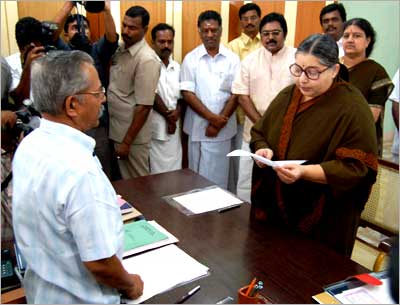 An election official watches as Chief Minister of Tamil Nadu and general secretary of All India Anna Dravida Munnetra Kazhagam J Jayalalithaa (R) reads out her nomination oath prior to handing over her election nomination papers in the Andipatti constituency at Theni, some 500 km south of Chennai, April 15, 2006.

Talking to reporters after filing her nomination, Jayalalithaa ruled out possibility of a hung Assembly and claimed that the AIADMK-led alliance would win from all the 234 constituencies. Elections will be held in Tamil Nadu on May 8.