Why the BJP is smiling

"What has happened will benefit us in the long run and we are happy. We might lose the states but certainly we will gain at the Centre," a senior Bharatiya Janata Party leader told rediff.com gleefully.

The BJP is no doubt  upset at what has happened in Jharkhand (where Governor Syed Sibtey Razi invited Jharkhand Mukti Morcha leader Shibu Soren to form the government). 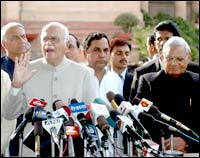 But it is also seeing a bright silver lining in the developments, believing that it will certainly benefit the party and the National Democratic Alliance in the long run.

The senior BJP leader said the Congress's latest move would hurt the party and the United Progressive Alliance.

He pointed out that former prime minister H D Deve Gowda, whose Janata Dal (secular) has an alliance with the Congress in Karnataka, has already criticised the Congress for its move in Jharkhand, saying that such unconstitutional steps were wrong.

The second benefit, according to the BJP leader, was that it had finally been given an issue that it could take to the people: that the Congress was subverting the Constitution of India with its machinations.

He insisted that by doing so, the BJP would seriously dent the halo that currently surrounds the Congress party in general and Sonia Gandhi in particular.

"Now we have an issue that we were lacking earlier to take to the people and we will certainly do so," he said.

The BJP was already drawing up battle plans that, besides meeting President A P J Abdul Kalam and submitting a memorandum to him, would involve calling in the party supporters and holding rallies in Delhi and elsewhere in India to protest the 'murder of democracy'.

What pleases the BJP even more is that the fallout from Jharkhand would hurt Sonia Gandhi's image. Ever since Sonia Gandhi declined the prime minister's chair, she has been perceived as being above petty politics.

But now the BJP is determined to show her as the leader of a party that would not hesitate to subvert the Constitution for its own petty gains.

The idea for the BJP is to compare her with Indira Gandhi's imperious ways. "Indira Gandhi could still get away with her acts of omission and commission because those days things were different. But today, media is so strong and we will fight our battle through it,"  he said.

For starters, the BJP plans to literally parade its majority in front of the media. It plans to bringing all its 41 legislative assembly members (a definite majority in a house of 81) to Delhi and present them before the President, and the media, thus effectively proving the claims by the just sworn in Chief Minister Shibu Soren as nothing more than lies.

A major fallout from the NDA's determination to lock horns with the government over the Jharkhand (and the Goa) issue is that passing of the Budget will be seriously hampered.

With the NDA determined to either stall parliamentary proceedings or boycott the sessions, it remains to be seen whether any of the bills will be discussed.

The BJP leader agreed that the Budget session would be affected. "The Congress should have thought of that first," he said, shrugging his shoulders.

"We didn't tell them to create such a mess. But one thing is for sure, we will not let the Congress get away with such blatant violation of the Constitution."

The Congress, not surprisingly, defended the action of the Jharkhand governor Syed Sibte Razi, but insisted that it had no hand in what was essentially a state affair.

He added that Shibu Soren would clearly prove his majority in the house.