Sign in  |  Create a Rediffmail account
Rediff.com  » Election » 'Bihar needs an icon, a person who stands above his caste'

'Bihar needs an icon, a person who stands above his caste' 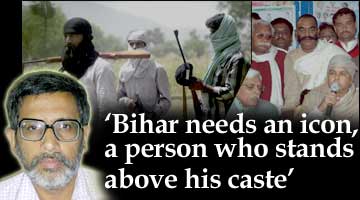 Dr Shaibal Gupta is member-secretary of the Asian Development Research Institute in Patna.

He has spent the last 20 years studying Bihar and its many problems and is considered one of the best-informed persons about India's poorest state.

In an interview to Deputy Managing Editor Amberish K Diwanji, Dr Gupta seeks to explain the historical, economic, political and social reasons for the current state that Bihar is in.

It is said Bihar is paying the price for its history. Will you explain that?

There are certain historical reasons why Bihar failed to develop alongside the rest of India and why it continues to lag.

First, as part of the earliest areas conquered by the British, it was placed under the Permanent Settlement (of 1793). This meant the land was not held by the farmers but by zamindars, who had the right to collect revenue and pay a percentage of that to the British.

The zamindars began to exploit the farmers for more and more and also, they themselves did nothing to develop the land's productivity. In fact, zamindari lifestyle meant doing nothing. Any kind of physical activity was looked down upon, and this can still be seen in Bengal.

The rest of India had the ryotwari system where the land belonged to the farmers, who paid taxes to the state directly and were therefore interested in keeping the productivity high.

Second, most of those involved in the 1857 mutiny were from Bihar. After the mutiny, the British clamped down hard on Bihar, and the Biharis in retaliation turned against everything British or Western. Thus they failed to modernise and accept new ideas that were sweeping across India in the late 19th and early 20th centuries.

Culturally, Bihar is part of the Gangetic belt and closely linked to Benaras. In Benaras, Hindi began to grow in opposition to English and in this opposition, instead of the language embracing modernism and emancipating its people, it embraced the past and traditionalism and all the old ideas that actually kept Bihar backwards.

Finally, land reforms failed in Bihar because the politicians and bureaucrats who were to implement such reforms all came from the zamindari class and thus ensured that such reforms were never really implemented on the ground. Thus, the peasant here remained deprived of land and a means of livelihood; he remained dependent on the landlords for his very survival.

Has not the lack of Bihar subnationalism also hurt Bihar?

In Bihar, there is no concept of Bihari nationalism.

Traditionally, there have been two forms of nationalism in the north: Indian and caste nationalism. A Bihari was always an Indian and of so-and-so caste; whereas in Maharashtra, a person was an Indian, a Maharashtrian, and then of his caste.

What this means is that there is no one to speak up for Bihar. For instance, when Bihar was partitioned, there were no voices that opposed the decision, no one to really challenge such a move. Can you imagine partitioning Maharashtra or any other state? Even if it is to happen, there will be huge protests and it will be a long process.

Another example was that when the government introduced the freight equalisation policy, no Bihari thought it fit to protest against this most silly economic idea (see below).

Then, there was no voice to demand compensation for Bihar when Jharkhand was made a separate state. And within Bihar, there is no one who really cares for Bihar. Every Bihari politician is concerned about his caste only. Worse, caste members expect their leaders to work for the caste, not for the state, so a leader can only ignore his caste at his own peril.

When Bihar was created from the Bengal Presidency in 1912, wasn't there a Bihari nationalism at that point?

Bihar was created because of the supercilious superiority attitude of the Bengalis and because some of the Kayasthas (one of Bihar's smallest forward castes) resented the Bengalis domination of the British Raj administration. But this movement was very small and it succeeded only because the British supported it as part of their policy to divide Bengal.

Here I must add that the British encouraged the setting up of various caste sabhas to keep the people divided. Casteism always existed, the British just encouraged it further. Thus, because Bihar was created so easy, there never built up any Bihari nationalism.

So is there no chance of a Bihari nationalism?

No, I think after the creation of Jharkhand, the first stirring of Bihari nationalism is slowly being formed but it has years to go.

Bihar needs an icon, a person who stands above his caste as a Bihari. The former greats of Bihar, such as (the first President) Dr Rajendra Prasad were seen either as Indian or hailed by their caste members. Also, after Jharkhand, the state has become extremely homogenous.

Did Bihar, despite its massive resources (before the creation of Jharkhand), miss out on industrialisation?

There are many reasons for this.

First is the most ridiculous policy introduced in 1948, the freight equalisation policy, which meant that transport was not to be considered an input cost. This meant a factory could be set up anywhere in India and the transportation of minerals would be subsidised by the central government.

This in turn simply destroyed Bihar's huge competitive advantage (of holding the minerals) and factories were set up everywhere else but in Bihar. Now the freight equalisation policy has been removed, but now Bihar simply lacks the infrastructure to compete with other states.

Second, in Bihar, the Bania (trading) caste is part and parcel of the backward castes whereas in western and southern India, they are seen as forward castes. Thus, the Banias had little influence and few resources for them to exploit this wealth (some of the biggest industries set up in what is now Jharkhand was set up by people from western India).

Third, the zamindari class, that had the wealth and education to do something, looked down upon labour and trading as a vocation. It is the Bengali bhadralok (big people) mentality that meant you become a professional or live off the land's earning. In western India, either the Banias were treated with respect, almost like Brahmins, or the forward castes took deep interest.

Finally, as mentioned above, there was no intermediary as there were in western India who could become the entrepreneurs that society needs. It is not just the trading community but also the other intermediary castes that often own some land and are therefore educated, who imbibe the entrepreneurial spirit. Bihar has just rich and poor.

What about the deep political-criminal nexus?

This in a sense can be traced back to the JP (Jayaprakash Narayan) Movement (1973 to 1975). JP urged an end to all ideology and for the people to participate in politics sans ideology. At that time the socialists were very strong in Bihar but after JP's call, many people joined politics even if they did not believe in the party's ideology. What this did was destroy the party structure and prevent the party from having an organisation that could mobilise support.

So after the JP Movement ended and politicians needed to mobilise support, they turned to local criminals who invariably had some kind of an organisation and the money and muscle power to mobilise support. Thus it was that the criminals became a part and parcel of Bihar's political set-up.

I must add here that it is also because of the destruction of party structures that parties have became family affairs.

Is there any sociological reason for the spate of kidnappings that are so rampant in this state?

When the stock markets were booming in the mid-90s, many NBFC (non-banking financial companies) were set up, promising exorbitant returns. These firms hired local young boys to work as agents and collect deposits from the people. Now, naturally the boys will only approach those they know to seek such deposits. When the stock market crashed, these NBFC simply folded up and ran away with all the money that had been deposited. The depositors in turn pressurised these young men, most of whom were known to them, to return the money.

Such young boys, under pressure to return the money they had taken and thus not lose face, soon turned to crime, especially kidnapping. This certainly is one reason for the sudden rise of kidnappings in Bihar. There are other reasons too.

It is said that Bihar is being churned with the lower castes finally taking their rightful place in society. Is this churning still on?

The churning is not yet over. As I have written, the traditional elite (the landlords and other forward castes) have made way for the 'vernacular' elites, comprising the more powerful of the backward castes like the Yadavs and some others like the Paswan (a Dalit group that has been rather militant and strong), who began their resistance some 40 to 50 years ago and are now centre stage.

Now, it is what I call the 'cockney' castes who are still on the periphery of society, who are fighting for their rights -- the lower backwards and the most backward Dalits who are demanding their rights. So this process is still on, it is not yet complete and a few years from completion. The good news is that it is taking place but till then some such violence will continue.

So do you see the situation improving?

Second, land reforms have to take place. Even now, too much land is held by too few, and this only reinforces the social inequity that is so prevalent. And linked to land is the third factor: the strategy of the ownership of the land. This is the subnationalism I mentioned. Biharis need to feel that this is their state and that it matters to them, or there is never any concern about the others in the state.

For example, in Maharashtra, land is held far more equitably. This has lessened social inequity, created more interest in the land and its benefits, and a greater concern for the rest of the state among the Maharashtrians.

As I said, subnationalism appears to be taking roots but land reforms are needed and a better social structure. Hopefully one will lead to the other in the coming years.

What about help from the government?

Tragically, the central government is not too concerned with Bihar, which contributes little to the country's exchequer. If India intends to grow at 10 per cent of GDP over the next few years, then Bihar is at present so behind that it needs to grow at 15 per cent to catch up with the rest of India.

This will require massive investment running into thousands of crores for the next few years.

What hurts is the feeling that the central government and India's ruling elite really don't care about Bihar. They see it as a sunset state and they are at present interested in the sunrise states of Maharashtra and the south.

But one should know that a large state such as Bihar simply cannot be ignored.