The wheel has come full circle for veteran Congress leader Vilasrao Deshmukh who is set to return as Maharashtra chief minister.

From a village sarpanch in Latur district to the top post for the second time, 59-year-old Deshmukh has extensive experience in the legislature and administration. 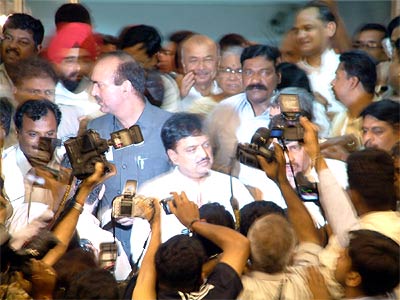 He hails from the economically backward region of Marathwada and is known for his administrative acumen. He had been a minister in various governments in Maharashtra from 1982 to 1995 holding the portfolios of revenue, cooperation, agriculture, home, industries and education.

He became chief minister in 1999 but had to step down in January 2003 and make way for Sushilkumar Shinde, a prominent dalit face of Congress, following factionalism in the state unit of the party.

A known Sharad Pawar-baiter, Deshmukh suffered a major setback in the 1995 assembly polls when Janata Dal candidate Shivajirao Patil Kavhekar defeated him by over 30,000 votes in Latur assembly constituency.

He won the seat in 1999 and retained it in this election.