Sena-BJP not to stake claim in Maharashtra

Top BJP leaders is understood to have decided not to stake claim for forming a government in Maharashtra. The BJP-Shiv Sena combine has won 121 seats in the 288-member assembly as against 139 of the Congress-NCP combine.

The leaders including Atal Bihari Vajpayee and L K Advani met in New Delhi on Saturday to discuss the election outcome and accepted defeat, sources said. Senior party leader Sushma Swaraj told reporters after the meeting that "the mandate is not in our favour. We will wait till the last results as trends vary from time to time."

She said the party high command was in constant touch with its leaders Pramod Mahajan and Gopinath Munde in Mumbai. They will meet Shiv Sena leaders Udhav Thackeray and Manohar Joshi on Saturday to take a final decision, she said. 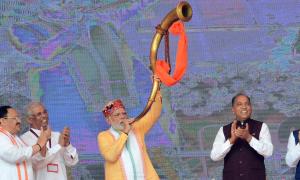