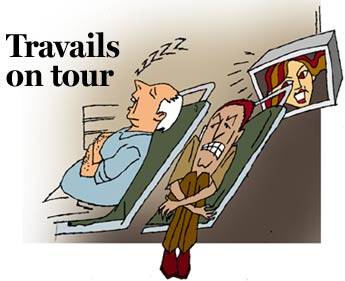 I wonder if it is just my luck or if everyone faces the same problem while travelling.

Last time I flew Delhi-Mumbai, I had the misfortune of sitting with an NRI family whose members constantly grumbled about how miserable the country is and what can be done to improve it.

Of course, from their perspective they were stuck with unhelpful people, but we will leave that there.

Today, while travelling Mumbai-Pune I had to sit behind a gent who insisted on reclining so far that my knees hurt.

I politely asked him to pull up the seat. He obliged, only to push it back again to catch up on his beauty sleep  it was 6.30am.

After some pleading with the conductor, I managed to get a seat on the last but one row.

But I hadn't imagined that my tormentor would telepathically convey to the person ahead of me to push his seat back. My knees were jammed and I couldn't go to the conductor again.

The smooth with the rough

But things aren't that bad after all.

The expressway is every bit as good as it is touted to be, notwithstanding the recent landslide at a certain section during the monsoon.

In fact, as I jot this down in my diary, my writing  which till now was looking like a roach had been dipped in ink and dropped on paper  is remarkably smooth, free of bumps and jerks, like the road.

There is mile upon mile of undulating road flanked by gentle hills. Every once in a while mist comes over, but soon sunlight pierces it.

Perhaps if one peers down from a glider (no jet engine; the scenery must be enjoyed in slow motion) it would look like a perfect drawing by a fifth grade kid: a long and winding road cutting through the hills, with fresh matchbox trucks on them and a hanging sun completing the picture.

One of the last places I expected to see a Sher-e-Punjab restaurant was Pune. But there it was, right in front of my eyes. I can now confidently say that the Lions of Punjab are everywhere.

The name itself  say it slowly to yourself and you will realise it  is perhaps the most macho that one can give to a restaurant. I bet you can't come up with a name that oozes more testosterone than that.

Think about it. Sher-e-Punjab conjures up images of tandoori chicken, butter chicken dripping oil, and paranthas topped up with butter.

As for me, I cross the road, park myself in a sissy 'Madrasi hotel', and order an upma and buttermilk.