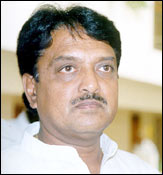 Maharashtra Chief Minister Vilasrao Deshmukh, who was sworn-in on Monday, has come a long way from being the sarpanch of a village to holding the reins of the state government.

This is the second innings for the 59-year-old Congressman, hailing from the backward region of Marathwada. Known for his administrative acumen and long experience in the state legislature, he had earlier occupied the post of chief minister in 1999 but had to step down in January 2003 following directives from the party high command.

A graduate in law, Deshmukh started his political career as sarpanch of his native village Babhalgaon in Latur district before he progressed to the legislative assembly in 1982. He was a trusted aide of former Union home minister late Shankarrao Chavan and was also once close to Union Home Minister Shivraj Patil.

However, in 1999, he got elected by a record margin and was chosen as chief minister when the Congress entered into an alliance with the NCP and formed the Democratic Front.

His tenure as chief minister was marked by the Shiv Sena-Bharatiya Janata Party's attempts to poach independent legislators supporting the DF and bringing the government almost to the brink of collapse.

His critics accused the chief minister of neglecting the interests of the DF alliance and those of party MLAs as regards development work in their constituencies. They also charged him with using the top post to further the acting career of his son Ritesh.

After being removed from the post in January 1993 to make way for Sushilkumar Shinde, Deshmukh was appointed as the AICC observer for the Gujarat, Chhattisgarh and Karnataka assembly polls.

Meanwhile, he was determined to stage a comeback. His opportunity came when the NCP demanded the chief minister's post after the assembly polls.

Deshmukh and his supporters succeeded in convincing the party high command that the NCP -- with more ministerial berths in its kitty -- was likely to assert itself in the next five years and therefore the Congress needed a leader who could keep the NCP's aspirations under check.

The selection of state NCP unit chief R R Patil as the new deputy chief minister further strengthened his argument and influenced a large number of Congress legislators to seek a strong leader, paving way for Deshmukh's return.
Source: PTI© Copyright 2022 PTI. All rights reserved. Republication or redistribution of PTI content, including by framing or similar means, is expressly prohibited without the prior written consent.
COMMENT
Print this article