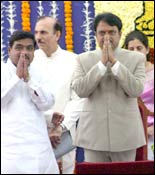 Vilasrao Deshmukh was on Monday sworn-in as the new chief minister of Maharashtra.

Governor Mohammed Fazal administered the oath of office and secrecy to Deshmukh at a simple ceremony at Raj Bhavan in Mumbai, making him the 23rd chief minister of the state.

The oath-taking ceremony was held 15 days after assembly election results were announced on October 16.

The Congress-NCP led alliance bagged 141 seats in the 288-member assembly.      The alliance submitted a list of 165 legislators to the governor while staking claim to form the government.