Energized by the Lok Sabha results in Gujarat, where the party  snatched six seats from the Bharatiya Janata Party (BJP), top Congress leaders are demanding the immediate removal of Chief Minister Narendra Modi.

Some of the newly-elected Congress MPs want the imposition of President's Rule in the state and the filing of criminal cases against Modi, who was chief minister during the post-Godhra "massacres"  in Gujarat.

"It seems no BJP leader including former Prime Minister Atal Bihari Vajpayee has any control on Modi. Vajpayee during his Gujarat visit after the communal violence had asked Modi to follow the `rajyadharma', but the chief minister simply did not hear the advice of the Prime Minister and went a step further by filing petitions in the Supreme Court pleading innocence," said former chief minister Shankersinh Vaghela.

"The new Cabinet should dismiss the Modi government and bring relief for the people living in Gujarat including the minority. This will also sent a message to other countries and other governments about good governance by Congress. After Supreme Court ruling in the Best Bakery case, which now has been transferred to Maharashtra, Modi should have stepped down on his own or Vajpayee should have asked him to do so, which did not happen," Vaghela told Business Standard.

"There is a growing opinion among Congress leaders, especially those from Gujarat, that the Modi government should be dismissed. I am personally examining the issue and will take it up with the leadership. A decision on the issue will be taken after the Congress forms the government. Even senior leader Shankersinh Vaghela is pursuing this issue," said state Congress leader and MP from Sabarkantha Madhusudan Mistry, who is also camping in Delhi.

"I will suggest to the party high command to register criminal cases against Modi and the BJP ministers who were instrumental in the riot cases after Godhra massacre. As the head of the state, Modi can not evade trial against him.Already a Court in  Himmatnagar of Sabarkantha district has served a summons on him for killing of two British citizens during the riot in 2002,"  said a  new Congress MP from Saurashtra.

Neither Modi nor other BJP leaders including state unit chief Rajendrasinh Rana were available for comment. 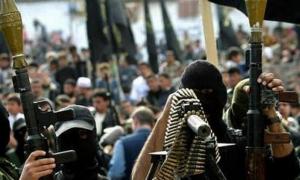