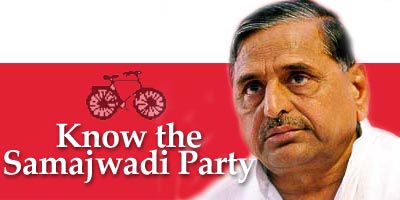 Party philosophy
The Samajwadi Party believes in democratic socialism and opposes the unrestricted entry of multinational companies into India. It stands for equality and prosperity for all. It is dead set against communal forces and favours a confederation of India-Pakistan-Bangladesh.

Who is Mulayam Singh Yadav?
A Socialist, Yadav had been with several parties, including the Janata Party, Lok Dal and Janata Dal, before forming the Samajwadi [Hindi for Socialist] Party. He has served as the country's defence minister and recently took over as chief minister of Uttar Pradesh for the third time. The former wrestler is addressed as netaji (leader) by one and all.

Party structure
Apart from Yadav, there is vice-president Janeshwar Mishra and eight general secretaries, including the powerful Amar Singh. The office-bearers are elected for a three-year term.

How is the party run?
Yadav's standing ensures that he is in overall command. There is no challenger in sight. His wish is the Samajwadi Party's command.

Is it a regional party?
Yes, based in Uttar Pradesh. Yadav derives a lot of his importance from the fact that the state elects the most number of MPs to the Lok Sabha.

Does it enjoy popular support outside UP?
The party has put up candidates in Maharashtra, Madhya Pradesh, Gujarat and some other places in the past, but has met with marginal success at best. But in this era of hung assemblies, every seat counts and the Samajwadi Party's capacity to damage the prospects of other parties makes it a formidable presence in all these states. For example, the Congress candidate in the high-profile Mumbai South parliamentary constituency lost by a little over 10,000 votes in 1999 while the Samajwadi candidate polled 19,000 odd votes.

SP's strength
It enjoys the support of the Yadav community. Its avowed objective of battling communal forces and Yadav's determination to defeat them has won it a large Muslim following as well, especially in Uttar Pradesh. The Samajwadi Party is also wooing Thakurs in a big way through general secretary Amar Singh.

SP's weakness
The party does not have a second rung of leadership. Also, its staunch opposition to Mayawati's Bahujan Samaj Party has stopped the Samajwadi Party from joining any anti-BJP alliance in Uttar Pradesh. On the other hand, its efforts to gain a stranglehold on the state's politics has resulted in it going soft of late on the BJP, whose perceived communal outlook it ostensibly despises. Naturally, Opposition parties have started questioning its secular credentials.

Future challenges
The Samajwadi Party can bank upon the Yadavs, but has now to compete with the BSP and Congress for the support of Muslims and Thakurs. Secondly, Yadav has got promises from leading industrialists to invest in Uttar Pradesh and create jobs; but none of them has borne fruit as yet. Poor law and order and the investor-unfriendly attitude of the bureaucracy are major deterrents. Yadav has to convince the electorate to give him enough time to convince his friends to keep their promises.

Political prospects
The growth of regional parties coupled with the caste factor, especially in Uttar Pradesh, has made the Samajwadi Party a force to reckon with. In this era of coalition politics, a repeat or improvement of its performance in the 1999 election (it had 26 MPs in the 13th Lok Sabha) will ensure a major role in the constitution of the next government at the Centre.