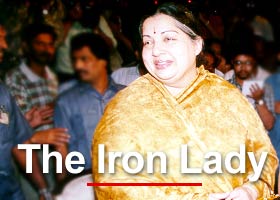 Full Name
Jayalalitha Jayaram or J Jayalalithaa as she prefers to be called now.

Wasn't she a famous actress?
Yes she was. In her time, she was the top Tamil movie heroine. She was very much in demand and acted with all the top heroes. What was in her favour was that the other heroines before her were all middle-aged and sari-clad. She was the first Tamil heroine who appeared in skirts. She acted in many movies with Sivaji Ganesan and M G Ramachandran, who would found the Anna Dravida Munnetra Kazhagam (now called the All-India Anna Dravida Munnetra Kazhagam). Her best-known Hindi film is Izzat; her co-star was the BJP candidate from Sikar, Dharmendra.

So how did she get into politics?
When MGR founded the ADMK, he invited her to join the party. She was a member of the committee that was formed to oversee the midday meal scheme that MGR had started in schools. Next, she became a Rajya Sabha member and later, propaganda secretary of the party. She was a successful politician in that she could draw huge crowds. At one point, MGR removed her from all posts in the party, but before his death in 1987, he once more made her propaganda secretary.

How did she become the AIADMK leader?
When MGR died, his wife Janaki became the chief minister. Claiming she was MGR's true heir, Jayalalithaa split the party. In the ensuing assembly election, her faction won 23 seats, while Janaki's faction won just one seat. Janaki soon retired from public life, leaving Jayalalitha the undisputed leader of the AIADMK.

Today, everybody in her party, including senior ministers, fall at her feet at every given opportunity. She is absolutely in charge and there is no second-rung.

When did she become chief minister?
In the 1991 election, the AIADMK and Congress tied up. The assassination of Rajiv Gandhi resulted in a wave of sympathy for the Congress and anger at the Dravida Munnetra Kazhagam, which was a supporter of the Liberation Tigers of Tamil Eelam, the assassins of Rajiv Gandhi. She became the state's chief minister.

What next?
As chief minister, she earned a reputation for financial controversy. The wedding of her best friend Sasikala Natarajan's nephew was estimated to have cost Rs 1 billion or Rs 100 crores. In the subsequent election in 1996, the AIADMK was virtually wiped out in the assembly election, winning just 4 out of 234 seats.

The DMK registered 46 cases of corruption against her. Jayalalithaa and Sasikala were even jailed for a few days. But even as the cases dragged on over the years, she wasn't proven guilty in a single case.

What made her famous in 1998-99
When the BJP formed a government for only the second time in its history (the first time was in 1996, when the BJP government lasted 13 days in office), Jayalalithaa initially supported the party and helped it come to power at the Centre. But somewhere down the line, she had a famous tea party with Sonia Gandhi and changed her mind about supporting the BJP.

In April 1998, a vote of confidence was held and the Atal Bihari Vajpayee government was defeated by just one vote!

In the 1999 Lok Sabha election, Jayalalithaa allied with the Congress. But that alliance suffered a black eye, as the BJP swept back to power.

She has flip-flopped quite a bit, hasn't she?
You bet. In 1991, she was allied with the Congress.

In 1998, she ditched the Congress and joined the BJP bandwagon, when that party formed the government at the Centre.

In early 1999, she hosted a tea party for Congress president Sonia Gandhi, and then withdrew support to the BJP government.

Alas for her, the BJP and its allies returned to power again, leaving her in the wilderness.

But in 2001, she returned to power in Tamil Nadu and almost immediately began making overtures to the BJP, much to the discomfiture of the other parties.

As chief minister, what has she done?
She banned lottery tickets, fired 200,000 government servants at one go, stopped free power to farmers, increased the price of rice in the ration shops, cancelled ration cards of all those who earn more than Rs 5,000 per month, hiked power and bus charges, passed a law seeking to curb religious conversions, and banned animal sacrifices in temples.

But after the 2004 Lok Sabha election were announced, she allowed animal sacrifices in temples and supplied free power to farmers.

She dislikes criticism and has filed many defamation suits against various newspapers. She tried to arrest the top brass of The Hindu, one of India's most respected newspapers, prompting Prime Minister Vajpayee to condemn the act.

A Ganesh Nadar
SHARE THIS STORYCOMMENT
Print this article