After regime change in Iraq, is Cuba next?

US President George W Bush on Thursday reiterated his support for Cuban dissidents who want to overthrow the Fidel Castro government, saying it is in the Cuban people's interest to be 'free from tyranny'.

Receiving a report from the Commission for Assistance to Free Cuba, Bush said: "We believe the people of Cuba should be free from tyranny. We believe the future of Cuba is a future of freedom.

This US strategy, said Bush, "encourages the spending of money to help organisations to protect dissidents and to promote human rights.

"It is a strategy that encourages a clear voice of the truth being spoken to the Cuban people through radio and TV."

It is a strategy that will prevent the regime from exploiting hard currency of tourists and remittances of Cubans to prop up their repressive regime.

"It is a strategy that says we're not waiting for the day of Cuban freedom, we are working for the day of freedom in Cuba," Bush said.
Source: PTI© Copyright 2022 PTI. All rights reserved. Republication or redistribution of PTI content, including by framing or similar means, is expressly prohibited without the prior written consent.
COMMENT
Print this article 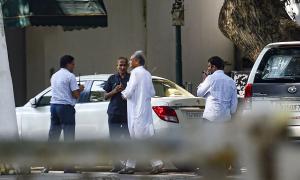