Sign in  |  Create a Rediffmail account
Rediff.com  » Election » Web Monitor: CPI-M web site does not have the right look

Web Monitor: CPI-M web site does not have the right look 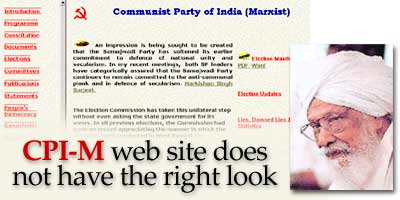 At first glance, the Communist Party of India-Marxist's web site made us want to log out. But trying to get under the skin of a true Communist, we ploughed ahead remembering that the Left believes in substance over glitter.

The grey background and abundance of text give the page a rather boring look but the issues addressed are serious. These include recent developments in Election 2004, the death of 21 women and a child during a sari distribution function in Prime Minister Atal Bihari Vajpayee's Lucknow Lok Sabha constituency.

It appears the site is not updated daily because the last update (We last visited the site April 28-29) was April 25. Neither have we got any reply to the e-mail sent to the address mentioned.

The last entry in the Election Updates section was April 9, 2004, which was the final list of CPI-M candidates.

The vertical menu bar on the left offers an introduction to the party, its programmes, its constitution, and links to Leftist newspapers and periodicals.

The section on the party Constitution is interesting. It lists out the duties and rights of members and the annual membership fee.

Some Documents we opened were long winding. Only a diehard Leftist will read through all of it.

In the Elections section, you come to know the number of state assemblies in which the party has a presence. Remember, the CPI-M is one of the six national parties in India.

The Committees section has the names of the party's Politburo, which is headed by veteran Harkishen Singh Surjeet. Incidentally, it appears that the most visible young face of the party, Sitaram Yechuri, is above West Bengal Chief Minister Buddhadeb Bhattacharya and former Kerala chief minister E K Nayanar in the party hierarchy.

The second link from the bottom in the vertical menu is Links, which leads you to http://www.cominternet.org, which lists Communist and workers parties around the world.

Unfortunately, the site has no pictures. The only one we noticed was that of Captain Lakshmi Sahgal, who the Left parties had fielded against A P J Abdul Kalam in the 2002 Presidential election, in the Elections section.

After another look at the site, we came across two more pictures, those of Surjeet and former West Bengal chief minister and another party veteran Jyoti Basu. You can see these pictures by clicking on their names in the list of Politburo members.

Proletarianism is fine but it will do no harm to the cause if people get to see some leading lights of the Left movement.

Probably in keeping with its proletarian outlook, all pages have a simple grey background, which may help with faster downloads.

To the right are links to, among other things, the party's manifesto and selected articles from The Marxist, which is described as the theoretical quarterly of the CPI-M. The most important one must undoubtedly be: Bengal LF Govt 25 Years.

The world over, Communism is on the wane but in West Bengal, the CPI-M-led Left Front has enjoyed the people's mandate for over 25 years. Rightfully, a section is devoted to the achievements of the Left Front government.

The two other states where the party still has a substantial stake are Kerala and Tripura.

For those unfamiliar with the Left movement, click on the second link in the left vertical menu bar titled Programme. But we doubt the web site will be able to persuade youngsters to do so.