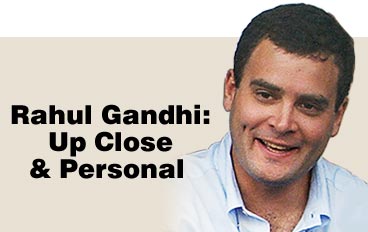 Rahul Gandhi is the latest in the Gandhi-Nehru family to enter electoral politics, but beyond the fact that he is the son of Congress president Sonia Gandhi and the late Rajiv Gandhi, how much do you really know about him?

Not many do actually -- not the voters in Amethi and elsewhere, not his party cadre, or even senior Congress leaders. The few who have met him don't recall him saying much. The few who have heard him, say he is of a shy disposition.

So here's all you wanted to know about Rahul Gandhi, and didn't know who/where to ask.

How old is Rahul Gandhi?

Soon to be 34. Date of birth: June 19, 1970. That makes him a Gemini, and if you believe astrologers, this is what he is like: 'Communicator. Social, outgoing. Sees and blends opposites/both sides of an issue. Vivacious, quick, flexible, versatile, lively and changeable. Mentally ambitious.'

Which school did he go to?

His elementary and primary schooling was at Modern School, New Delhi. But because it was the height of Punjab terrorism (in October 1984, his grandmother, then prime minister Indira Gandhi, was shot dead by her Sikh bodyguards, and the family continues to live under a security blanket), Rahul and younger sibling Priyanka were mostly taught at home.

Unlike father Rajiv Gandhi, Rahul did not go to Doon School.

So did Rahul go to college in India at all?

He went to St Stephen's College, Delhi, for a year. He enrolled for history honours in 1989 and left in 1990. But here's the most interesting part: he was not admitted to St Stephen's on merit, but from the sports quota.

Really? So what sport was he good at?

He is good in rifle shooting, trap shooting being his speciality.

Like Anjali Bhagwat, you mean? So did he win any medals etc? Does he still shoot?

No, not a great shooter like Anjali; but like Rajiv Gandhi he trained at a shooting range in the Aravalli ranges near Delhi. He does not shoot these days.

Was Rahul any good at studies while at St Stephen's?

His academic performance is unknown, as Rahul did not complete his degree.

But Dr Anil Wilson, the principal of St Stephen's College, recalls him as a diligent student. "He had no airs about the famous family he belonged to," says Dr Wilson.

Rahul's security cover must always have been stifling, right? Also, celebrity children wear their parents' fame prominently. Was Rahul one of those Delhi kids?

Apparently not! Rahul was always embarrassed by the security cover the college was under because of him, is what Dr Wilson has to say: "I think he left college because of security concerns. We really did not get an opportunity to assess his academic brilliance."

So was it sayonara to studies for Rahul after that?

No. He went to the United States in 1990, to study economics at Harvard University.

Great! So did he complete his studies in Harvard?

A little bit of confusion there. He did complete the four-year AB course in economics, but did not get his degree since he did not get the required grades.

And here, may we point out that Rahul's dad, Rajiv Gandhi, did not complete his studies at Cambridge? Neither did his grandma Indira Gandhi at Oxford's Somerville College. But did the absence of a degree interfere with the late Mrs Gandhi's leadership abilities? We think not!

So between leaving Harvard and fighting the Lok Sabha election, what has he been doing?

Nothing really. An acquaintance of Rahul says, "He is a man of apparently no occupation." After Harvard, Rahul shifted base to London and worked as a financial consultant but even that is a bit unclear. Some say he worked as a manager in a financial consulting agency, the name of which is not known. But Congress leaders who know Rahul disclose that "he was whiling away time in Britain and the US."

Sounds so much like P G Wodehouse's Bertie Wooster!

In 1999 he kicked up his job to help mother Sonia Gandhi and sister Priyanka during that year's Lok Sabha election. Congress leaders say Sonia has been politically grooming Rahul over the last five years, and that she has now "initiated him into politics, fulltime."

Yes, he has been living in Delhi for the past five years. But unlike his rather flamboyant sister Priyanka, he has always kept a low profile.

Is Rahul married? There were some reports about a foreign girlfriend.

No, he is not married, but you are right, he has a Colombian girlfriend, Juanita.

So where and how did he meet her? Are they just good friends, or is it more serious?

Congress leaders in the know say he fell in love with Juanita at Harvard. She is the daughter of a Colombian businessman. She is said to be spending a lot of time in Delhi these days. Rahul traveled with her to Kerala's Kumarakom backwaters resort in January -- in the company of sister Priyanka and her husband Robert Vadra, so we guess the family is cool about the relationship.

But she does not stay at 10 Janpath, the Gandhis' home while in Delhi. Sources say she stays at the family farmhouse on the outskirts of Delhi.

Now back to politics. What do Congressmen think is Rahul's USP?

His looks. They say he resembles his late father. In fact, when he toured Amethi in January in the company of sister Priyanka, the villagers apparently went berserk over the resemblance to his late father.

And where was Rahul last seen in public?

In Karachi on March 13, at the India-Pakistan one-day game, on invitation from the Pakistan Cricket Board. His sister and brother-in-law were also with him. And no, Juanita was not there.

With inputs from Onkar Singh and R Swaminathan