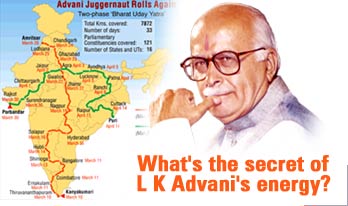 When Deputy Prime Minister L K Advani kicks off his Bharat Uday Yatra from Kanyakumari on Wednesday he will be the only contemporary Indian politician to have undertaken three major political yatras of this magnitude, at a regular interval of seven years.

Advani embarked on his first yatra over the construction of the Ram temple in Ayodhya in 1990. The yatra translated into a swing in the Bharatiya Janata Party's political fortunes in the 1991 general election.

The deputy prime minister's second yatra, the Swarna Jayanti Yatra, was held in 1997 to mark the golden jubilee of the country's independence and to carry the message that the BJP, if elected, would take the country from swaraj (independence) to suraj (good governance).

For this yatra Advani will be on the road for a gruelling 33 days.

Many media reports have suggested BJP General Secretary Pramod Mahajan drew up Advani's schedule. "This yatra is Advaniji's idea, and not Mahajan's as is generally believed. He (Advani) felt not only would he complete his yatra without any problem but it would also give him more strength to work harder," senior BJP leader Jagdish Mathur told rediff.com.

L K Advani turned 75 on November 8 last year. At his age, most Indian men would enjoy their sunset years. What gives the deputy prime minister the energy and zest to complete a 7,872 km journey that would exhaust men much, much younger than him?

rediff.com tried to find out what the secret of L K Advani's amazing energy and spirit is.

Contrary to the belief that Advani does yoga every day to keep himself fit, those who have known him closely for the last 15 years say the reason for his high fitness levels are his long walks.

"He must walk for one hour every day in the morning unless, of course, it is raining. He hardly feels any stress or strain at any point of time. He loves to read, and when he is in a pensive mood he ponders over things or reads good books," says Mathur.

Advani has an oil-free diet and only eats meals at home. According to members of his family the deputy prime minister eats very little -- just enough to keep him going.

He relishes a katori of dal and one or two chapatis each during lunch and dinner. His breakfast consists of two slices of toast with butter and jam with tea or coffee.

"He is a strict vegetarian. He must have a glass of milk at before going to bed. He is very fond of sweets and does not miss an opportunity to have sweets on a regular basis," a close aide of Advani told rediff.com

Rajasthan Chief Minister Vasundhara Raje Scindia used the same air-conditioned coach to campaign in last winter's assembly election, which Advani will use for his journey across India. Balbir Singh, who drove Scindia during the Rajasthan election, will be Advani's driver.

One member of Advani's family will stay with him throughout the yatra and ensure that his needs are taken care of.

Besides his trusted private secretary Deepak Chopra and BJP spokesman Prakash Javadekar, a team of commandos from the Delhi police and National Security Guard will accompany Advani.

The rath, which is a converted Swaraj Mazda mini-bus, will have Internet access and secure fax.

Advani is an avid movie buff and his daughter Pratibha has selected a collection of films, which she feels her father should watch on the DVD player installed in the rath. She is also selecting books, which the deputy prime minister may want to read.

As a security precaution, Advani will not spend nights in the coach. On an average he plans to address five rallies every day.

BJP chief M Venkaiah Naidu will flag off the yatra at Kanyakumari at 10 am on Wednesday. The first phase of the yatra will end in Amritsar, Punjab, on March 26.

The second phase of the yatra begins at Porbandar, Gujarat, and ends in Puri, Orissa, on April 16.

"Advaniji will reach Kanyakumari on March 9 by a special flight. He will be accompanied by his wife Kamla, Pratibha, son Jayant and his wife. Mrs Advani will travel with him up to Bangalore before flying back to Delhi," Javadekar, who is coordinator for the yatra, told rediff.com