'Atal doesn't know what is happening' 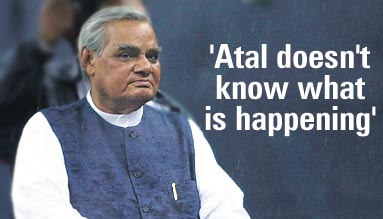 With political parties admitting new members by the day before the general election, the hush-hush meeting between former Union law minister Ram Jethmalani and Congress President Sonia Gandhi was nothing short of sensational. After all, wasn't it Jethmalani who led the charge against Sonia's husband Rajiv Gandhi when the latter was prime minister, publishing 10 questions every day in the Indian Express on the Bofors issue.

In an exclusive interview to Chief Correspondent Tara Shankar Sahay, Jethmalani spoke on why he met the Congress chief, what he thinks of Prime Minister Vajpayee and other issues.

Why did you meet Sonia Gandhi recently?

Where did you meet her?

We met at her official residence. It was an unpublicised visit [on February 24]. We discussed the political situation and I told her my views.

What are your views?

My views are [that] because what has happened in Gujarat and what the Bharatiya Janata Party-led government has done to Tehelka, I am no longer its supporter. They are not even repentant about what has happened. And the manner in which Tehelka and other people were harassed, the manner in which [Gujarat Chief Minister] Narendra Modi is still being lionised, to my mind, goes a long way in destroying national integration and press freedom which means democracy.

Was there any particular electoral or other issues around which your discussions revolved?

We had long discussions. I at least ensured that the anti non-secular vote is not divided over a seat here and a seat there. I told her don't carry on conversations and fights and be loyal to one another and create a complete united front. I suggested that Mulayam [Singh Yadav] and Mayawati at the moment should sink their differences though they are mortal enemies.

Were you satisfied with the discussions?

I am very happy that we had a good bit of understanding of each other's viewpoint. I don't remember any embarked difference of approach. So I hope we will be able to forge a real good, strong, secular front.

More than anything else, we have to keep corrupt people out of politics. I have my own views about some people which may not be shared by Opposition parties. One of the grievances which I have against the BJP is that they are now trying to embrace Jayalalithaa. This kind of unprincipled politics -- the way they [the BJP] took D P Yadav and then threw him out, what is this?

It shows total immaturity and thoughtlessness of action unworthy of a serious political party.

Do you plan to maintain further contact with the Congress chief?

I have not had any further meetings with Sonia Gandhi but some of her friends and workers keep meeting me. I hope we will be able to arrive at some kind of consensus to fight the BJP-led coalition.

What about talk in some quarters that Ram Jethmalani is going the Congress way?

I am not joining the Congress, I am an Independent member of Parliament [the Rajya Sabha]. I have the democratic right of talking to anybody, collecting as many people of my own way of thinking as possible. Be sure, I am not joining any political party.

Would you say you were encouraged by your interaction with Sonia Gandhi on the points which you raised on the political situation?

Yes, of course. Unless we had developed a fair measure of understanding, I would give up the effort.

What do you think about the advertisements being carried on a war footing to woo voters?

I am very happy that the 'India Shining' hype has already exhausted itself. It is already gone. What do you mean India is shining when you see a minister accepting bribes on camera and you don't allow the law to take its course but say that it is the anchor of your election campaign.

India doesn't shine merely because some people are making money. India shines when there is light in every poor man's house.

What a fall from character! Nobody thinks of any principle! When there is bankruptcy of morals, you can't have lights in anybody's house.

Since you have been a senior minister in the government, what is your assessment of Prime Minister Atal Bihari Vajpayee?

I don't believe Atal doesn't know what is happening.

If he doesn't, then I have rightly called him Dhrithrashtra the other day. You can't adopt that kind of attitude.

A prime minister is a prime minister, he is responsible for everything that happens whether he knows about it or doesn't. It is his duty to know everything. He must be clear on every issue. Not one single clear statement has been made by the prime minister so far on any issue including Ayodhya.

What are your views on the thorny Ayodhya issue?

I ask you, what is his [Vajpayee's] symbolism in starting his election campaign from Faizabad [near Ayodhya]. Why don't you say that the [Ram] temple will be built only when non-Hindus like Muslims and Christians will lovingly participate in its construction. That is the only way to increase the number of Ram bhaktas. You don't get Ram bhaktas by forcibly building the temple.

Why are secular forces having trouble in mobilising into a cohesive unit?

Why have they failed to make secularism dominant in the country?

They are genuinely not secular. For them, secularism is also a way of getting votes.

What is the Congress' role in this context?

I hope ever since the party has been out of power, it has done some rethinking.

As the chairman of the Kashmir Committee, what is your perception of the government's role?

We have had no support from the government. On the contrary, we have had criticism and obstruction from it. The wrong people have been selected as interlocutors.

What do you think about Indo-Pak cricket diplomacy?

Cricket should not depend on politics. Both countries should visit each other and play. Sportsmanship should not be tampered with. Win or lose, how does it matter. As boy scouts, we used to have a small poem -- 'When the great scorer comes to write against your name, he writes not that you won or lost but how you played the game.'