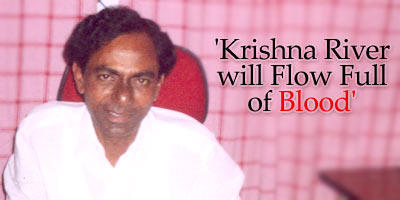 He was the man who got all the Telugu Desam Party legislators firmly behind Chandrababu Naidu when he staged a coup against Nandamuri Taraka Rama Rao and grabbed the top job in Andhra Pradesh.

K Chandrasekhar Rao was a minister in the NTR government, and after the coup became an important member of the Chandrababu cabinet.

Three years ago he walked out of the TDP and formed the Telangana Rashtra Samithi. As head of the TRS, Rao lost no time in seizing upon the sporadic 30-year old movement for a separate Telangana state as his own and brought it centrestage.

Earlier Interview: 'No force on earth can stop us from achieving a separate Telengana'

Today he is a cosy twosome with the Congress and wrangled 42 assembly seats and six Lok Sabha seats from the party which once dominated politics in the southern state.

Rao attracted large crowds where he went and did not lose an opportunity to run down the Naidu government for 'neglecting' Telangana.

The busy and much in demand leader took time off after the polls closed in Andhra Pradesh to speak to Special Contributing Correspondent A Ganesh Nadar.

What is the TRS and what are its demands?

The only agenda of the Telangana Rashtra Samithi is a separate Telangana state.

What is the reason for this demand?

When this region was liberated from the Nizam of Hyderabad, it was an independent state in the Union of India. The people of Telangana wanted to continue like that. But Congress leaders of that time convinced the people to join Andhra Pradesh (carved out of Madras Presidency after the linguistic reorganisation of states) as Telugu was a common language.

Telangana joined Andhra Pradesh subject to certain conditions. None of the conditions were adhered to. We were exploited by every government since then. They set up a Telangana Regional board. But nothing came of it.

What are the differences between Telangana and the rest of Andhra Pradesh?

This region is totally backward. There are no industries. There is no water for irrigation. Why do you think there are so many Naxalites in this area compared to the rest of Andhra?

But why are the Naxalites targeting only BJP and TDP leaders and leaving you and the Congress alone?

Naxalism is a problem that has to be tackled as a socio-economic problem. It should be dealt with politically and with a human face. Unfortunately Chief Minister Chandrababu Naidu speaks to them only with a police attitude. He has declared war on them. He uses only the police against them. There are so many fake encounters to kill them. There are no human rights. There has been no dialogue with them. As he has chosen to come down heavily on them, they are targeting his party and his ally, the BJP.

If you win the election will you join the government?

Is there a timetable for the formation of the Telangana state?

It has to be immediate. After the formation of the government that will be first on the agenda.

What are the aspirations of the people of this region? Are they happy being part of Andhra Pradesh or do they want a separate Telangana?

Of course, they want a separate state. Why do you think this agitation has lasted so long? It would not have lasted without the support of the people.

Do you think all the problems of the people will be solved by the formation of a new state?

I am not saying that. But with the formation of a separate state at least there will be an attempt to solve problems. To solve the problems of 35 million people.

Many people say if Telangana goes then the rest of Andhra Pradesh will be safe from Naxalites.

But it is concentrated in Telangana.

I don't agree with that.

What are you planning to do about the Naxalites?

We will solve the problem politically. We will tackle it administratively. We will not tackle them with the police. It is a socio-economic issue and will be dealt with accordingly. It is not sporadic violence. It is not impulsive violence. It is organised. It is well planned. We will talk to the leaders. We will sit across the table with them and discuss it. They will be rehabilitated and will become part of the mainstream.

What did you do for Telangana when you were a minister in the government?

But Naidu has done a lot for Information Technology.

This IT is all humbug. It is a myth he has created. What have we got out of IT? Nothing. What is happening is that Naidu speaks to the collectors on video. How does that help? It is all humbug and hype. Forty percent of the people are illiterate. What is the point of telling them about computers? Even among the literates everybody is not computer savvy. It is a pointless exercise. It is a good technology. I have nothing against IT. You must use it where it is necessary, but not everywhere. He is using it to fool the masses.

So you don't think his computers are working?

All this is humbug. This online connectivity, video conferencing, e-governance; all of this is fraud. How is it that there were one crore bogus voters when he has so much database? We complained to the Election Commission and got them deleted. It should not have happened if all his IT was working.

What is the first thing you will do if Telangana is formed?

Hyderabad has been the capital of Telangana for a thousand years. Nobody can change that.

Many say since thousands of crores of rupees have been spent on developing Hyderabad, you cannot lay sole claim to it.

Tell them to show me development. Everything here has been developed by the Nizam. They have done nothing. When Telangana was a separate state Hyderabad was the 6th largest city in the country. Today it is not in that position. Bangalore has gone ahead. So have other cities. And they are saying they have developed it. All of them are fools.

Will you accept Telangana without Hyderabad?

Only Naxalites talk about violence and rivers of blood.

If anybody comes with such a proposal then that's what will happen. We have guts. If we want to join the Naxalites we will join them. But we don't need to. We have our own organisation.

We are wise. We know how to get our state. After the results come out the Congress will form the government at the Centre. It will be a coalition. It will not be an independent Congress, but a dependant Congress. That is the situation we want. We are their allies. They depend on us. They will have to listen to us.

In the Nizamabad public meeting where you and Sonia Gandhi addressed a meeting jointly, both of you did not mention Telengana.

We are politically aware of when to speak what. We did not want to give a stick to Chandrababu Naidu to beat us with. We will speak when the time is right.

When you went in for an alliance with the Congress did you tell them your one point agenda?

In the north the BJP has created three new states without any hungama, without blood flowing in the Ganga or anywhere else. What if the BJP agrees to support your demand? Will you cross over to the BJP?

The BJP will lose power. Even if they support Telangana they cannot do anything, as they will be out of power.