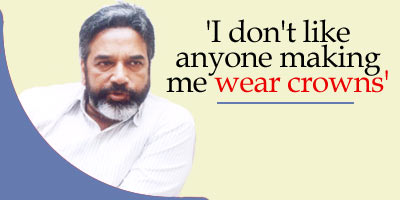 Are you very particular about the way you dress when you go campaigning?

Not at all. I generally wear pyjama-kurtas because my father always did, though it is not an outfit preferred by Tamil Nadu's politicians. I am also one of the few guys who move around in a pant and shirt. Now, it is quite common in the BJP but, in the beginning, all the others used to wear dhotis; I was the odd man out.

Are you superstitious about anything before you start campaigning?

I am not superstitious at all. I don't look at rahu kaalam or anything like that. But I have one condition. I don't like anyone making me wear crowns or huge garlands or asking me to carry a sword. I can use a sword really well in martial arts, but I don't like holding it as a politician.

How do you keep yourself fit?

I get up very early. I have a gym at home and I work out every day. I used to train army commandos in martial arts in my gym. I have a set of exercises based on martial arts but I don't do any weights. I have done all kinds of martial arts, including karate, judo, kalaripayattu and stick fighting. I practise regularly. I am a polo player, a shooter and a swimmer; that is how I keep myself fit.

How do you relax these days?

I really don't have time! Luckily, though, I am the kind of person who can sit in the middle of a crowd and relax. I can shut myself off. I listen to music. I carry a Walkman even when I am exercising. I listen to a lot of instrumental music. I also like old English, Tamil and Hindi songs. I have established that politicians can be different. By nature, I am not tuned to politics. I still am not comfortable.

Are you as spiritual as your father? Do you perform puja before you start your day's campaign?

I am spiritual but I don't believe in rituals. I have been gong to Sabarimala for 36 years. I use the long, traditional route. I go to Sabarimala because all are equal in front of Lord Ayyappa. Whether you are a rickshaw driver or an industrialist, once you wear the mala, you are a swami. I go to temples like Madurai Meenakshi and Thanjavur Bruhadeswara to enjoy the atmosphere. I don't perform any puja because my mother and father do a lot of puja and that is enough for all of us. That doesn't mean that I am a rationalist or an atheist.

What is the funniest question you have been asked during this campaign?

People are still curious about my father. They ask, is he a villain at home? Is he very strict? The truth is, I can't remember him ever being harsh in real life.