'Passion, not aggression, drives me'

S Sreesanth is not the typical cricketer one is used to watching on the field. The 24-year-old from Kerala is not only a talented fast bowler, but also a very good dancer. He writes poems and even songs. But it is his antics on the field -- which he describes 'as passion for cricket' -- that's gaining attention.

A few days ago, his constant chirping during the second One-Day International in Kochi made the Australians see red.

In a freewheeling conversation with Special Correspondent Harish Kotian, the pace sensation dwells on the Twenty20 World Cup triumph, and reveals what makes him such an aggressive cricketer.

You took that final catch to give India victory in the Twenty20 World Cup final against Pakistan. What was going through your mind as you got ready to take that crucial catch?

I was not thinking of anything; my mind was blank. I was lucky enough to get that final catch which will be remembered. To be very honest, I didn't bowl well in that final match and I had to be a part of the winning side. I was praying, I was telling God, 'give me something to be a part of the win'. Then I got [Shahid] Afridi's catch, and the last catch I never expected.

I never thought he [Misbah-ul-Haq] would play that shot, that too with just four runs to win. I don't know why he tried that shot; I think he made a fool of himself.

Did you anticipate that shot early, or were you caught off-guard? It was such a high-pressure catch; the whole of India stopped for a minute as the ball went up in the air till you caught it.

I had anticipated that catch early. All thanks to Robin [Singh] Sir. He has done a great job with my fielding. He helped me improve my fielding and I have begun to enjoy it. That is one area where I have improved.

So, the moment he [Misbah-ul-Haq] moved I anticipated that shot; that helped me to be in the right place.

How big was it for you being part of the Twenty20 World Cup-winning squad?

It's big; I mean it's priceless. It will be remembered for millions of years. Whoever talks about that Twenty20 Cup will say, 'India, wow,' and remember the tournament. So I think I am lucky and fortunate; again, by God's grace, I think my hard work has really paid off. I thank everyone who helped me right now.

India played just one international match in the Twenty20 format before the World Cup. In that sense, how important was captain Mahendra Singh Dhoni's role?

Yes, we played just one match. But I was lucky; I had more experience because I played in the Asian XI, in the Afro-Asia Cup Twenty20 match. So I had a bit, I mean one more game experience than the rest. It doesn't make much difference, but still.

Dhonibhai took charge and did a great job. He is very cool and quiet and knows how to man-manage. I think Dhoni has taken a course in man-management. He really knows to manage the players.

Did missing the senior players make you guys that more determined and focused at the World Cup?

We have been watching them and learning a lot. I have been lucky to be in the same side as the senior players. Everyone can see in their eyes and know their attitude towards the game.

Trust me, Sachinpaaji [Tendulkar], Rahulbhai [Dravid], Dada [Sourav Ganguly] -- they all have attitude and the will to succeed. We learnt from them to play cricket, to enjoy cricket, by watching them play. Even though they were not there, this World Cup belongs to them as well and to every Indian cricketer.

After the bowl-out win we never looked back: Harbhajan

Venkatesh Prasad has been with the side for some time now. How has it helped you having a bowling coach all the time?

It has been great help, especially if you see the slower ball I have developed. Lot of thanks to Prashant Chandran, who plays for Kerala and MRF. He is a Kerala Ranji team player and he is one who showed me how to play the slower ball. I think that has really helped. That is one area where I have been working hard. Venkybhai is also doing a great job and I really enjoy working with him.

Does Prasad also work on your aggression, because you always seem to be in the news for being over-aggressive at times?

I don't really work on the aggression part. He always tells me, 'Sreesanth, you have to be very careful and never cross the line'. He always gives me the right advice: do not cross the limit! 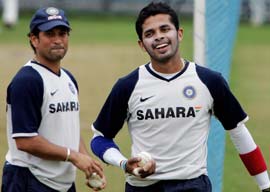 Your Kerala team mate and friend Tinu Yohannan said aggression is the force that drives you. Is it true?

Not really. It's not aggression; just passion for cricket that drives me. Whatever I do, I always want to give my best. I feel I can channelise my aggression to the right thing and be a good bowler, a world class bowler. So I just want to make sure that whatever I do, I do with passion and give everything to it.

Your parents seem a bit worried about your aggression. I remember, the last time we spoke to your mother -- when you danced after hitting Andre Nel for a six in a Test in South Africa -- she said she was worried about what you did and told you to take it easy.

Yeah, she did call and told me to go easy. But I told my mom and convinced her that I am Nel's very good friend outside the field.

For example, someone like [Matthew] Hayden or [Andrew] Symonds; they are all huge, but on the field, with the ball, I really don't care. My job is to get wickets for the country and if possible intimidate them with my bowling, just good bowling, I mean.

So I always tell my mom not to worry, I won't fight with them outside the field; it is only inside.

Australia has so many great batsmen in their line-up. As a bowler, what goes on in your mind when you come to bowl against them?

Tell us some of the best sledges you have used to irritate batsmen worldwide?

Some of those shouldn't be said on air, but, still, there are a few I could say.

Some are like, 'You are huge man, but your bat looks very small in your hand; I think the ball might just miss your bat.'

What did you tell Nel after hitting that six and that famous dance of yours?

What was his reply?

He didn't reply. He had a sheepish smile and that was a scene I will cherish forever. He is now waiting for me to face him again. I faced him three or four times after that and belted him. Even in the Durban Test I scored 29 not out and I hit him for three boundaries in one over. I think it's been a good journey so far. Hopefully, he will get me out once, but that doesn't go into history.

But, trust me, that six, and the sheepish smile after that, I will never ever forget.

You are a big hit among youngsters in Kerala. There were a lot of female fans as well cheering you during the [Kochi] match. I heard you have received a lot of marriage proposals?

Many marriage proposals are coming but, trust me, right now I am only focusing on the game. I don't really believe getting into a relationship just for the sake for it. I don't get satisfied by it.

Everybody says you are earning so much money, so much fame, what else do you need? I say I need peace of mind. I don't think just by getting married I will achieve it. I just want to make sure that I follow my game. Who knows, if I find the right girl at the right time, with the right attitude, I will get married to her. My future wife should be able to take care of me after I am 35. Till 35 I can take care of her, but after that she has to take care of me.

How special is it coming back to Kochi and playing in front of your home fans?

I am very happy. It is the second time I played here. But this time it was special for me because last time Sachinpaaji, Rahulbhai and Dada weren't there.

This time it was fun because they visited my home also. So, for me, it is a blessing in disguise.

Tell us about your family's role in your success. Even though you are a superstar in Kerala, your parents seem unaffected and still live a simple life.

I am very fortunate and lucky to have a family like mine; again, it's God's grace. They have been very helpful. They don't really believe in a high profile life.

Even now my dad travels by a bus; even now he walks to the temple, which is around three or four kilometers away. But he loves walking without any security. Both my parents are still the same; very simple. I also want to thank my brother Deepu for helping me throughout.