We Indians really do not know how to respect or take care of our heroes. Whether it is a saint from the past, a freedom fighter, or a current icon in any industry. We seem to have a problem with successful people. We always are trying to bring down our current stars -- either it's suspicion or jealousy, or whatever other reason, after putting them on a pedestal ourselves! It's a fact.

Take the example of one of our all-time heroes and exemplary sportspersons -- on the field and off it -- Sachin Ramesh Tendulkar. He has been forced to single-handedly take care of scoring runs for the past two decades --- not that he asked for the responsibility! Remember, this is a team game! We expect him to score a century each time he steps in to bat! He never claimed to be a "God", as some of us referred to him as in the past. Extremely talented, hard-working genius? Yes, he is all that and then some.

Well, the reason for me writing this article is that I heard all the so-called experts on TV/Newspapers calling for his head, along with many non-experts and the general public at large. So I was wondering if he was really in that bad of form, that he has to be dropped? I pulled up his stats along with all the other Indian batsman who have played at least five games during the 2006/2007 season (including the 3rd ODI against the West Indies in Chennai). Well among all the nine "batsmen", take a look at where the little master stands:

Sachin has played 14 games in all, at an average of almost 37 -- the best among all batsmen this season! His overall career average is almost 44. So, is he really out of form that warrants dropping him??

Then, let's take a look at the rest. Dhoni and Dravid are the only other players who have an average of above 30! And then look at the rest! No wonder India is such a pathetic team!

Now let's take a look at how the current world's top batsmen have been doing the last season.

Sachin vs the rest

The flavour of the day -- Ricky Ponting, the guy who has hit a purple patch, is just about the same average as Tendulkar. Instead, Sachin has scored more runs than him in the same number of games! You don't see Australians calling for Ricky Ponting's head to be dropped from their ODI team!! See all the other players' runs/averages.

Hussey has an average of 98! His average is highly inflated due to the fact he has been not out so many times, as he comes down the order. But he has scored almost 100 runs less than Tendulkar in the same number of games! And no, India has not played minnows like Kenya, Zimbabwe or Bangladesh the past season! 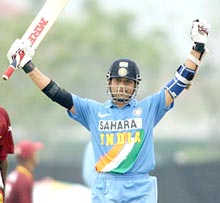 So my question is: Is Sachin Tendulkar so bad on current form that he needs to be kicked out?? Well, the above stats do not warrant that! Whether we like it or not, he is the best we have! He is a genius, and I personally feel that there are two reasons (assuming he is 100% fit), that he is not doing as well as we expect him to, these days.

First is the fact that he is told to be the "anchor" and cut out most of his aggressive strokes, as he is a senior player and the rest of the team should play around him and Dravid. Well Sachin is in the mould of Viv Richards -- their best form of defence is to attack! Secondly, I think, finally, the weight of the entire nations expectations, and his own, are cowing him down. It's probably getting to him mentally, and he really is under a lot of pressure. That's why, he tentatively prods (bringing the bat down late) and ends up getting lbw or caught inside the circle with half-hearted shots.

The so-called experts, all and sundry, are talking about how "bad" a batsman he is now, and the same impatient/unreasonable guys who are calling for his head will praise him if he scores a century the next game. The two games after that, if he "fails", it will start all over again.

Yes, Indians are emotional people. Remember that Sachin is an Indian too. A self-respecting one, at that. Don't hurt him so much that he decides to call it quits before his time!

Do you agree with the columnist? Tell us

Stats: Tendulkar has most ducks vs WI