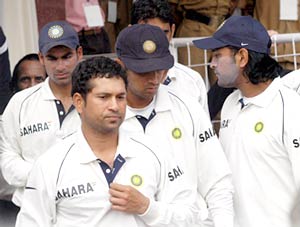 It was Rahul Dravid's 100th Test; Sachin Tendulkar's 132nd, the highest for any Indian. What petered out at the Wankhede stadium in Mumbai was anti-climax.

For once, Dravid could not save India, and Tendulkar was booed off the ground.

Right from the decision at toss to the disastrous performance in the second innings, India had it all wrong. Add to that a generous sprinkling of dropped catches, and Team India was blown away on home turf by a young and green England side.

The Mumbai track failed to live up to reputation as a square turner, but had enough to make life difficult for batsmen from the fourth day. India collapsed for 100 in the second innings to hand England a 212-run victory and 1-1 draw in the three-Test series.

Do you think the England players were, simply put, hungrier for success than the Indians? Or was it a script horribly gone wrong in Mumbai?