Munaf Patel was so unpolished when he made an entry into organized cricket that he quickly came be known as Lagaan by his Mumbai teammates. That was because of his awkward fielding and batting. But, like the film, the bowler from Bharuch has shown that right spirit is a great substitute for professional sophistication.

Shoulders sagging, he talks and walks with a lazy hum. He is not an earnest speaker, not even when talking about his own bowling. Boringly so, he rambles out the cricket clichés in a heavily Gujrathi accented Hindi. 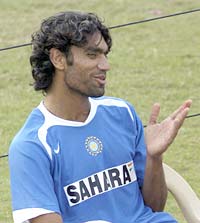 With Greg Chappell looking for genuine speedsters in the Indian team, Munaf's stock has risen; now he has also added the reverse swing to his repertoire.

"The coaching staff in Maharashtra -- Chandrakant Pandit and Darren Holder -- also helped me a lot. Though I was not playing for Mumbai, the level of competition was the same, since Maharashtra also play in the 'Elite' [Ranji Trophy] division," he says.

Munaf had just completed his first practice session as a Team India member at the practice nets, at the Punjab Cricket Association ground in Mohali.

How does he see his prospects in the Indian team?

"If given a chance I will try and perform well."

That is why, never ask such questions to Indian cricketers! Because, even the rawest of them come armed with the ten words that work with the media.

The only time he gets touchy is when his bowling action is scrutinized.

Three years ago when he signed up for Mumbai in one of the most chaotic and hyped deals in domestic cricket, Munaf was uncomfortable when asked whether his shoulder would give away under pressure. The fastest bowler in India then generated most of the pace during the shoulder rotation.

As was the case, Munaf's career was set back by various injuries. He disappeared from Mumbai cricket as fast as he had come in. Then last year he appeared for Maharashtra, under the same coach and captain -- Pandit and Sairaj Bahutule -- with whom he made the Mumbai debut.

A good season with Maharashtra, where he took 34 wickets in seven matches at an average of 19.7, helped him get a call for the three-day warm-up game against England. A 10-wicket haul in the game brought Munaf back into the national reckoning.

So, has there been a change in action to reduce risk of injury and make him more effective?

"No, my action is the same," he says stubbornly. "It's only that I have taken good wickets in a crucial game."

Munaf may have made an impression in Baroda, like he has so many times in first class matches, but the real test of the raw spirit awaits.

Deepti Patwardhan in Mohali
SHARE THIS STORYCOMMENT
Print this article