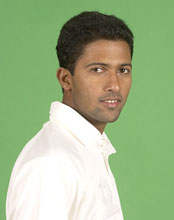 Mumbai opener Wasim Jaffer has been recalled to the Indian Test team after nearly three-and-half years.

The 27-year-old son of a Mumbai bus conductor has played seven Tests, but is yet to prove his credentials in the longer version of the game.

261 runs at an average of 20.07 in 13 Test innings doesn't justify the talent of a batsman, who is virtually unstoppable in domestic cricket.

He made his debut against Hansie Cronje's South Africa in 2000 but was dropped after two Tests. He was recalled two years later for the tour of the West Indies only to be shown the door again after the series in England that followed in 2002.

This year the right-hander has displayed terrific form, scoring 357 runs in three Ranji Trophy matches, at 89.25, and has been rightly rewarded with a recall to the Indian Test team.

He recently scored a double century for Mumbai at the Kotla, against Delhi in the Ranji Trophy season opener last month.