India's Sachin Tendulkar and Virender Sehwag have been selected as members of the Rest of the World XI Test and one-day squads which will take on Australia in the Johnnie Walker Super Series in Melbourne and Sydney this October. 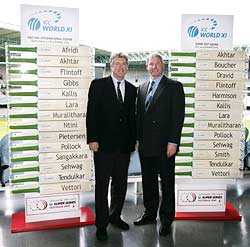 Rahul Dravid was selected for the Rest of the World XI Test squad and will serve as vice-captain.

Tendulkar has been appointed the ODI team's vice-captain.

Former New Zealand great and ICC World XI selector Richard Hadlee (right) announced the final squads for the Super Series in Melbourne on Tuesday. The squads may be changed subject to players' fitness or if they are serving an ICC ban.

South Africa took the cake as its captain Graeme Smith has been chosen to lead the Test side while former skipper Shaun Pollock will lead the ODI team.

Sunil Gavaskar, who chaired the selection panel, said Australia should expect no reprieve in the series after coming from a tough Ashes battle in England.

"Australia will be looking to regroup after the intensity of the Ashes series in England, but I don't think the cricket will be any easier for them against these World XI sides. England has shown up fault lines in Australia's performances and I know John Wright, Graeme Smith and Shaun Pollock will be eager to capitalise on that," he said.

Gavaskar was part of the World XI that played against Australia in 1972 and was happy to see the concept make a comeback.

"This is the first time for decades that the greatest players from the rest of the world have combined their talents, and I expect them to put Australia under real pressure."

Australia captain Ricky Ponting said the Super Series was a great challenge for both teams.

"It will be an amazing experience to play against a side of this calibre and I think for those players in the World XI, it will be an equally exciting prospect to play in a team alongside the game's greats," Ponting said.

"No doubt the Australian public is talking about the tight Ashes battle that we're currently in, and hopefully, that can whet people's appetites for even more great cricket in October."

Cricket Australia Chief Executive James Sutherland said the series was the biggest cricketing event in Australia since the 1992 World Cup.

"It's a chance for Australia to welcome the world to our doorstep and show what cricket means to us as a nation," he said.

"This is the ultimate sporting contest, the best team in the world against a team of the world's best players."

Former India coach John Wright was appointed coach of both the World XI sides by the ICC as he has the best record against Australia as a coach.

South Africa's Goolam Rajah will manage the sides while England's Kirk Russell will take on the role of team physiotherapist.

The series schedule includes a three match ODI series at Melbourne's Telstra Dome on October 5, 7 and 9 and a six-day Super Test at the Sydney Cricket Ground from October 14 to 19.

South Africa has six players across both squads, England and India three, Sri Lanka and Pakistan two, West Indies and New Zealand has one each.

Australia, unbeaten in a Test series at home since 1992, will name their final squad at the conclusion of the Ashes series next month.