New Zealand skipper Stephen Fleming ended Day One of the second Test against India at Mohali in much the same way as he started it. Smiling.

He won the toss and elected to bat. His openers batted in a calm and collected manner to see New Zealand pile 247 runs for the loss of only one wicket by close of play.

The story may have been different had the Indians taken the chances that came their way. A dropped catch by skipper Rahul Dravid early in the morning and a missed run-out opportunity by Parthiv Patel, who had a bad day behind the stumps, proved costly. 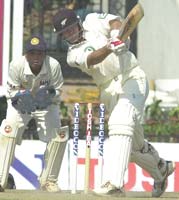 The Indian bowlers, with the exception of leg-spinner Anil Kumble, were lacklustre. The ace leg spinner's spell of 28-10-57-1 was, without doubt, the best part of the day for the Indians. A fighter, if there ever was one, he gamely stuck to his task even as the other bowlers struggled.

In Motera, in the first Test, the Indians complained about a dead pitch that did not offer them any assistance. But in Mohali, they can have none. The pitch afforded bounce for the quicker bowlers and turn for the spinners. But in face of a determined Kiwi team all Indian plans went awry. Openers Lou Vincent (106) and Mark Richardson batted brilliantly, particularly in the morning session when the conditions were completely in favour of the bowlers, to force the home side on the defensive.

When stumps were drawn for the day, Richardson was unbeaten on 102, with Scot Styris batting on 7.

The visitors ended the first session on 77 without loss after 28 overs, with Mark Richardson and Lou Vincent both batting on 29.

Both teams made one change in their line-ups because of injury. India decided to give Yuvraj Singh his debut as Sourav Ganguly was indisposed while Jacob Oram was replaced by seamer Ian Butler.

Stephen Fleming won the toss and a huge smile creased across his face as he decided to bat, because batting on the last day on this wicket could prove to be a handful. 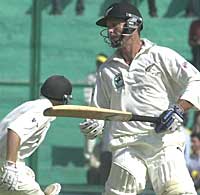 The Kiwis were off to a flying start, with both Richardson and Vincent going for their shots. The first three overs realised as many as 23 runs. Richardson, though, was lucky to be there at the end of the session, being dropped by Rahul Dravid when on 10. Zaheer, getting the ball to move a bit off the seam, took the outer edge of the Kiwi opener's bat and the ball travelled straight to first slip, where Dravid, normally a very safe fielder, put down a sitter.

Thereafter, a period of calm was ushered in by the bowlers in a bid to curtail the scoring rate. The best way to keep the runs down is to take wickets and the Indians failed to do that.

Zaheer and Lakshmipathy Balaji got the ball to move alarmingly under an overcast sky and the bounce was inconsistent too. In this scenario, it was very surprising when Sachin Tendulkar was introduced into the attack as a first-change bowler.

Zaheer only bowled five overs in the first session when common sense would have meant that given the helpful conditions, India's premier fast bowler should have been given an extended spell. Instead, it was Balaji and Tendulkar who bowled in tandem.

The ball was seaming around a lot and one felt the Indian team management missed a trick when they decided to go into the match with only two seamers. In hindsight, a bowler like Ajit Agarkar, coming in for Ganguly, might have been a very useful change.

Richardson and Vincent looked at ease against the wayward bowling of the seamers and struck some well-timed boundaries.

Tendulkar did not get a wicket but he did not do anything wrong either. He bowled a good length and got the ball to swing, but at his pace it is highly unlikely to see him claim a wicket. However, Lou Vincent did manage to edge a Tendulkar delivery onto his knee and was limping thereafter. He underwent treatment but to no avail and eventually opted for a runner, Paul Wiseman.

Zaheer seemed to completely off-colour, bowling at speeds of around 130 in his first spell and managing to push that to around 134 in the second. The left-armer normally averages around 140 km/h.

The pitch has continued to assist the bowler but the batsmen too have continued to hold fort with a clever mix of aggressive and defensive batting. While Richardson was content to hold up his end, Vincent attacked the bowlers with relish.

Two sixes of Harbhajan Singh really stood out. Vincent danced his way down the track to the pitch of the ball before launching it into orbit with great ease on both occassions. The right-hander was always on the look-out for a quick single and therein was his greatest strength.

Not once did the Kiwi pair get bogged down during the session in which they scored 91 runs at a very good run-rate. More than sixty per cent of the runs have been scored of the leg-side and that statistic clearly indicates the trouble Indian bowlers were having in maintaining a consistent line and length.

But the Indian team has had it's chances. Cricket is a game where you have to take the chances as they come and India have missed twice already. Rahul Dravid in the first session and Parthiv Patel in the post-lunch.

In the fourth over after lunch, Richardson paddled Harbhajan in the 32nd over and Dravid's throw should have resulted in an easy run out. But just before the ball reached Parthiv's gloves he committed the cardinal mistake of taking his eyes off the ball. Vincent, who was way out of his crease at the point, gave the Indians no chance thereafter.

Dravid tried all the bowlers with the exception of Tendulkar but the bowlers have just not been consistent enough to trouble the batsmen with consistency. None of the bowlers have even got anywhere close to dismissing the Kiwis and that will be a matter of great concern to Dravid.

Vincent brought up his fifty with a well struck six off Harbhajan. The best part of the partnership was the ease with which the Kiwi openers ran singles. Once they did that, the bowlers just did not have enough time to work on a particular player.

The Indians started the second session with the spin of Anil Kumble and Harbhajan. Zaheer Khan was brought into the attack in the 44th over and he immediately felt the brunt of the attack. He conceded 12 in the over as Richardson stroked his way to fifty.

The ease with with the batsmen have negotiated the Indian attack and set a very good platform for the visitors means that India are certainly going to have a battle up their hands for the rest of the Test.

Vincent and Richardson did not put a foot wrong in the final session until the former was eventually dismissed for 106, scored off 237 balls with 14 boundaries and two sixes.

Kumble finally effected the breakthrough on 231. Vincent, shaping to play the sweep, lost his footing and was caught in front of the stumps.

It was Vincent's highest score, beating his unbeaten 104 against the Aussies in his debut match in 2001 at Perth. Since that knock, he has struggled to replicate that kind of form. But looking at his batting during the second innings of the first Test at Ahmedabad and now, in Mohali, it appears he is on his way back to his best.

In the 66th over of the match, Kumble and Richardson had a minor tiff which ended with both of them trying to stare each other into the ground. The incident seemed to upset Richardson's concentration. In Kumble's next over, the left-hander tried to adopt an aggressive approach and looked to hit Kumble over his head, but failed to get to the pitch of the ball and was lucky to not to be caught by the bowler.

Richardson, at the other end, was struggling with a hamstring injury but kept going valiantly to keep the Indian bowlers at bay. Virtually everytime, the 32-year-old tried to sweep, the pain would prove too much to bear and he would end up flat on the pitch.

The left-hander eventually reached a well-earned century, but his passage through the nineties was very painful and the anguish on his face clearly visible. This was Richardson's third century.

Scott Styris walked in to take Vincent's place at the wicket and things continued as before. The Kiwis are firmly entrenched in the saddle and unless the Indians claim early wickets on Friday, they are certainly in for the long haul.