'Taylor was a better captain than Waugh' 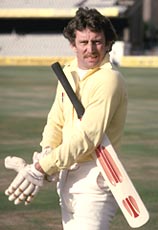 As captain of Australia, Ian Chappell never lost a Test series. He revived a team low on confidence in the early 1970s and created a bunch of fierce competitors who took on the mighty West Indies and are ranked as one of the best Aussie sides ever.

Never reluctant to employ the cut or pull against fast bowlers, Chappell played his cricket the way he lived his life -- on his own terms.

"I learnt most of my captaincy from my teammates," he revealed in an exclusive interview with Faisal Shariff when he was in Mumbai late last month in connection with the CEAT cricket awards. "Rodney Marsh called me an idiot on the field for my bowling changes once and a debutant once advised me how to dismiss [West Indian opener] Roy Fredericks.

"You never know where your next piece of advice is coming from."

Brother of another Australian legend Greg, Chappell had scant respect for administrators and coaches in his playing days. Even today he hasn't found much cause to change his opinion.

Do you agree that the quality of bowling has fallen over the last few years?

It is a cyclical thing. We have been through really good bowling over the last two decades. So many bowlers have taken 300 Test wickets, starting from Courtney Walsh, Wasim Akram, Waqar Younis, Muthiah Muralitharan, Shaun Pollock, Allan Donald, Glenn McGrath and Shane Warne. Now that is a great lot of bowlers. There was bound to be a fall-off. There has been no period ever with so many great bowlers playing the game. It is a rare exception rather than a rule.

Three new teams have been added in the last 20 years, which means 33 new players play the game. It will dilute the effect. I would not call it the worst period.

Cricket is a batsman's game. Bowlers have it tough these days.

Bowlers like Andy Roberts, Joel Garner, John Snow, Glenn McGrath, Wasim Akram and Waqar Younis would have bowled on any type of wicket. You can limit them and yet they will find ways to worry batsmen. I would say that the laws are aimed at shackling bowlers than batsmen. It boils down to the fact that there is lack of thought in framing the laws of the games. There is lack of knowledge at the highest level.

What do you make of Matthew Hayden's world record 380?

Records never meant much to me, so [whether] an individual scores 375 or 575 does not matter to me. I would rather see if he is a really good player or not. Even if he gets a good 130 and wins the game for his country, then that is better than a 380 in a draw.

Having said that, I must say that what Hayden has achieved is phenomenal despite the fact that the runs were scored against Zimbabwe.

Sunil Gavaskar made a very valid point when he said that if making 380 against Zimbabwe is no mean feat, then how come others haven't made it against Zimbabwe, or for that matter against Bangladesh.

Is it time to redefine the law of what constitutes chucking?

If a man from Mars came and asked me to explain to him what a throw is, it would not be easy. And that is exactly where it opens up avenues for legal people to come in and complicate the game. Do we want cricket to be like the America's Cup?

The rules of what an illegal delivery is should be left to the umpire to decide on the field.

Sure, you should have the processes and rectify [illegal] actions if there are any, but not on the field but off it.

The biggest danger is that chucking is more difficult to face when a bowler bowls 75 normal deliveries and whacks the 76th delivery at a batsman.

If a bowler keeps chucking balls you get used to it after some time, but the surprise element of a chuck is what makes the game unfair.

I have done throwing myself in baseball and I am telling you that you should call a bowler for chucking only when he is blatantly throwing the ball.

This whole nonsense of degrees is silly, that I can bend the arm 10 degrees but not more than 14 degrees. It sounds comical. And allows legal people to create hassles in the sport. We should have fewer laws and make the game easier.

Now look at the four rules. The rule is simple: the ball should not touch the boundary fence. Why then waste time checking if the fielder's body touched the ropes?

They say a captain is as good as the team he leads. Do you agree with that?

I don't agree with that at all. It negates the idea of a captain. A captain's job is to make the team better, to get them to play to the best of their ability. A captain's main job is to raise the level of each player so the team competes.

I don't judge a captain by his wins or defeats. Take, for example, Arjuna Ranatunga. I rate him highly as a captain though he has more losses than wins. He was a very good captain and I always maintained that even before the 1996 World Cup.

I remember when they toured Australia before the World Cup in 1996; Ranatunga led them brilliantly. Man to man, the Lankans and the Aussies were no match. The Lankans were not supposed to be there in the contest, but for three and a half days Ranatunga kept his flock on the field and made them compete. That is captaincy.

How do you rate Sourav Ganguly as a captain after India's World Cup campaign?

He has played some part in their success, but the Indian team has some brilliant players who change the course of games on their own.

Why are you so opposed to the concept of a coach? Hasn't John Wright played a big part in India's success?

I will start giving Wright credit when he starts taking wickets, scoring runs, or taking catches in matches. I can't stand this bullshit of coaches. What do coaches discuss at team meetings? Bowlers, bowl outside off, fielders, take your catches, and batsmen, score some runs. Show me which plans have stopped the Don, Gary Sobers, or Viv Richards.

I remember Sobers scoring 254 against Australia for the Rest of the World at the Melbourne Cricket Ground and no one could stop him. Someone asked me the next day if I had got my field placement all wrong? I said, 'Yes, if I had placed my field at the Sydney Cricket Ground, I would have been better off.'

Sobers thrashed us to all parts of the park. I met Richie Benaud and asked him if I was screwing up on the field placements. He told me, 'Don't worry about anything. You can't stop batsmen like Sobers, though we can try.' He told me that he would have set the same field I had set at that time, barring the gully.

But to say that John Wright is unimportant in India's success is unfair. He has injected a work ethic in the team, inculcated discipline and professionalism, besides ensuring that the players are fit.

That is precisely my point. This is the job of the captain. What is the skipper for? I always made sure that my boys were fit. I did not have to tell them. If they were not up to it on the field, they were gone. I had great players in my team, no superstars. Australia does not have superstars, only great players.

I remember once telling Dennis Lillee to tell me when he was tired so that he was not overused. He turned around and told me, 'I will keep bowling till you ask me to stop. Like you need runs to be in form, I need to get wickets to be in form.' That was the commitment of the players to their captain.

Take [Aussie coach] John Buchanan away and replace him with a kid off the streets to coach Australia. They will still maintain their bloody record.

What coaches do today is the captain's job. And they should have enough time for it.

I am not against coaches, but they should be coaching kids in the formative years.

How many coaches have led their countries? The captain should run the game on the field.

The Steve Waugh saga has gone on for way too long. Is it affecting Australian cricket?

If I had it my way as selector, I would have changed the Test captain at the end of the [last] Ashes series. Of course, Steve Waugh would keep playing, but then he would live and die on form. That was the right time for changing the captaincy.

It is not about Steve Waugh, it is about Australia.

It is not fair to give a new captain a fresh bowling attack. Ricky Ponting should have been given some more time with the established bowlers like McGrath, Warne and Jason [Gillespie]. It is pointless extending his career when you have new players in the wings.

Giving Ricky Ponting a diluted attack makes his job a bloody tough one. Test cricket is tough unlike one-day cricket and there will be a hole without McGrath, Gillespie and Warne.

All this talk that his true character will be revealed by leading an inexperienced attack is hogwash.

What is this Australian team's weakness?

Their inability to play spin on spinning tracks is one apparent weakness. Both the series in India and Sri Lanka were closely fought, but Australia ended up as the losing side. If I were trying to beat them I would concentrate on spinners. The team needs to be well balanced, but spinners need to make their impact.

What will it take to beat Australia in the forthcoming Test series?

India will need to bat well, bowl well, and field very well. And all this not for a single day or session, but for each of the 20 days they play Australia in the four Tests.

I have seen teams compete for hours, sessions, and days, and then give up. You must keep the will to fight them. It is a matter of not blinking and going on. They will make mistakes.

Are the Aussies scared of V V S Laxman and Harbhajan Singh after the Eden Gardens drubbing?

The Aussies will definitely be wary of Laxman and Harbhajan, but they will be most wary of Sachin Tendulkar. He is the bloke I would be worrying most about.

How would you rank Allan Border, Mark Taylor, and Steve Waugh as captains? Mark Taylor would easily be number one. Border and Waugh would be tied at number two.

Border had a good team, but he couldn't take it to the top. But that is Allan's nature.

4 Naxals killed in 2 encounters in Chhattisgarh