India won a remarkable game of cricket at the Adelaide Oval by four wickets. Rahul Dravid top-scored the run chase with 72 runs and aggregated 305 runs for the Test. Quite fittingly he bagged the man of the match award.

India has gone one-up in the four-match Test series against Australia and the series, which was billed as a no-contest by the Australian media, is now a contest for the Aussies.

After Sachin Tendulkar and skipper Sourav Ganguly were dismissed in the post-lunch session, a brisk 51-run partnership between VVS Laxman (32) and Rahul Dravid ensured that India scored the remaining 193 runs without a sweat. Winning Tests is about winning it session by session. If the first six sessions were dominated by Australia, the next eight were dominated by India and that proved to be the difference between the two sides. And one man made sure that India dominated the Test -- Rahul Dravid.

Dravid batted on four of the five days in this Test exemplifying his endurance, skill and concentration.

To know how tough it is to follow one big innings with another, ask Ponting. The Aussie skipper-designate was brought down to earth by a second innings duck after a first innings double ton. With Dravid at the crease, the chase was always on.

Tendulkar played with an overdose of caution, which ultimately proved to be his undoing. In the first over itself a tentative Tendulkar nicked a big turner from MacGill, which fell inches short of Hayden at first slip. But the vintage Tendulkar was in display, in short spurts though, with some glowing drives and the powerful pulls.

When the 50-run partnership was registered for the third-wicket between Tendulkar and Dravid, the little master had contributed 26 of them to Dravid's 20. Tendulkar in fact left 32 per cent of the balls he faced compared to Dravid, who middled 78 per cent.

But instead of playing freely and going for his runs, Tendulkar decided to stick it out in the middle. Misreading a flipper from MacGill, Tendulkar offered no shot and was trapped bang in front of the wicket.

Tendulkar's dismissal for 37 ended the healthy partnership of 70 for the third wicket and India were 149-3.

Ganguly joined Dravid in the middle and was gone for 12 pushing at a delivery from Bichel. Katich at gully picked up a sharp low catch. At 170-4, the game was still alive.

Sixty runs away from victory, the man who has dropped pressure from his vocabulary, walked out. V V S Laxman announced his arrival with three spanking boundaries from a single MacGill over.

Despite the ball keeping low and wicket behaving truant, Laxman made batting look easy. Dravid got an industrious fifty of 127 balls.

Never one to excuse a bad ball, Laxman hit six fours in his brief stay at the crease scoring 30 of 31 balls taking India to the brink of a famous victory.

If Dravid set the platform with his tenacious 62, Laxman had taken that extra step forward and taken Australia out of the equation.

At tea, India were 217-4, requiring another 13 runs to win the Test. Just a sip away from the cup of victory. Soon after tea, Laxman lost his patience and was dismissed.

Katich had Laxman caught at mid-wicket by Bichel for 32. But it was little too late for Australia in the day with only another nine runs needed for victory.

Parthiv Patel and Dravid tested the patience of the Aussies getting to the total in singles.

With scores tied, Katich bowled Patel around his legs and India were six wickets down. One run away from a famous victory.

It was fitting that the two heroes of the Test, Ajit Agarkar and Rahul Dravid, were at the crease when the winning run was scored.

Dravid smacked MacGill to the fence, kissed the Indian crest on his cap and hugged Agarkar.

India had won a truly memorable game against all odds.

The Indian team has proved all those, including yours truly, who predicted its downfall after its bowlers were clubbed all over the park for 400 runs on day one of the match.

A win after 22 years is surely one to cherish. India will start favourites for the next two Tests in Melbourne and Sydney hoping to bag that till now elusive historic overseas series win.

Seven years ago chasing 120 to win in the West Indies a young, talented Indian side was bowled out for 81. There were five men from that team (Laxman, Dravid, Tendulkar, Kumble & Ganguly) who carried the hurt from there.

Today they exorcised the ghosts of that defeat by playing out of their skins and defeating the world champs.

As Virender Sehwag and Akash Chopra walked out to bat on the final morning of the Test with a prayer in their hearts and a steely determination in their eyes, there was no mistaking the Australian nerves.

Skipper Steve Waugh, who is often called the iceman, was being testing by a team from the sub continent in his backyard. And the timing could not have been more dramatic. This was not the farewell Waugh had scripted.

Jason Gillespie and Andy Bichel were charged up and the consistent speeds in excess of 140 kmph were ample evidence of how desperately the Aussies wanted to win this game.

In the third over of the morning, Andy Bichel rapped Akash Chopra on his pads only for David Shepherd to turn down the appeal. The ball seemed to be heading for the stumps and Chopra was lucky to have survived.

But three overs later, Gillespie investing all his muscle in the opening spell, trapped Chopra plumb in front and umpire Rudi Koertzen agreed. Chopra, who looked the more positive of the two openers in the morning, was gone for 10 and India were 48-1.

Australia had struck early and it suddenly didn't seem as easy for India with history pointing against India. Only eight times has a visiting team ever topped 200 in the fourth innings to win a Test in Australia.

Sehwag, unusually watchful and scoring his first run of the morning after 25 minutes, seemed determined to stay at the crease. Ironically the run was scored off the fastest ball of the morning -- Gillespie clocking 146 kmph.

Bichel, with a knack of picking wickets, was almost successful again when Sehwag flicked him uppishly towards mid-on. MacGill, however, failed to sight the ball and missed an important chance.

Sehwag hit the first four of the morning cutting Bichel to the point fence, as the Aussie target drew closer.

The batsmen found the boundaries more regularly after drinks, and the course of the match turned India's way.

Brad Williams, braving a shoulder injury, then bowled the best over of the morning inducing an edge from Dravid only for Gilchrist to grass it.

Hitting the ideal length, Williams beat Dravid thrice in the same over besides forcing him to edge the ball. It was the 13th over of the morning and India was still 157 runs adrift from a win.

Two overs later, Shepherd displayed a great piece of umpiring, turning down an appeal for a catch. The ball clearly hit Dravid's forearm before it flew into the slips.

An hour into the game and Waugh employed MacGill into the attack hoping to create inroads into the vaunted Indian batting line-up.

Sehwag, always fancying his chances against the spinners, smashed a huge six of MacGill and was bracing for his first fifty of the series.

Three short of his fifty, Sehwag stepped out in a pre-mediatated manner to smash MacGill, missed the ball and was stumped by Gilchrist. (79-2)

Sachin Tendulkar walked out to join Dravid and two of India's top four run-getters in Tests were at the crease, in a bid to create history. It could not have been a more appropriate setting for India.

A perfectly executed paddle sweep by Tendulkar must have done his confidence a load of good.

The firm push from Tendulkar brought up the hundred for India and India had done well to end the morning session losing just two wickets and adding 71 invaluable runs.

122 runs still separated India at that time from the famous victory. 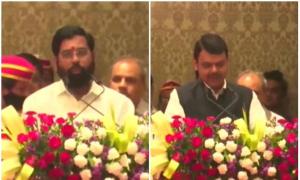 Shinde sworn in as Maha CM, Fadnavis is deputy CM