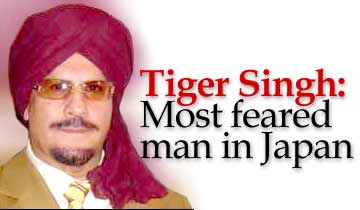 When Tiger Jeet Singh goes to Japan, he cannot step out of his hotel without having to beat people off with a stick.

In Canada, he is just another burly Sikh who lives near Toronto.

But all that may change following a documentary on the legendary Indo-Canadian wrestler made by Lalita Krishna, which was aired April 23.

Tiger traces the journey of Jeet Singh Hans, a penniless 17-year-old villager from Punjab who arrived in Vancouver in the early sixties and went on to become one of the most popular professional wrestlers to ever sweat and bleed in the squared circle.

Inspired by professional wrestling on Canadian television, he felt that "if these people can fight so can I, and I am going to do it," Singh told rediff.com

He moved from Vancouver to Toronto, which was better known for its wrestling circuit.

After initially rejecting him, the trainers concluded that 'maybe a turbaned wrestler could be an attraction.'

His phone has not stopped ringing after the documentary was screened. He was mobbed by young boys and girls when he attended the Baisakhi celebrations at the Nathan Phillip Square at Toronto City Hall on April 24.

"They take me as a role model," he said. (Tiger Jeet Singh, his wife and three sons arrive for the screening.) 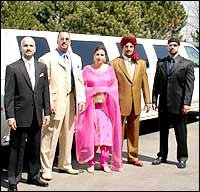 Asked why he is not so well known in Canada despite his near superstar status in Japan, he said: "I am a heavyweight wrestling champion in Japan. You have to be there to see the size of the crowd."

Krishna, a well-known documentary producer in Canada, said Tiger was enthusiastic when she approached him about the documentary.

"In Japan people call him a villain whom they love to hate. They want their pictures taken with him but at the same time they are literally afraid of him as he walks in the streets with a sword and a stick, indiscriminately beating people with no fear of any prosecution," she said.

If he were to do that in Canada, Tiger could be in real trouble, she said.

"I went to Japan with him for his last fight, When I went around with him, people followed him. It is not the same in Toronto, as people don't follow him here. Here (in Canada) he is another South Asian."

"When I went to Japan, I saw that this man cannot step on the road without people following him. You cannot get on to the train without thousands of people wanting to take their photos with him. They know Tiger. The moment they see him people start gathering around him. They really want to be nearer him so that he slaps them. They want to be slapped by him. That's something special there."

"Tiger has established his role in Japan as a wonderful villain whom people love to hate. The Japanese truly love to hate Tiger. He's out and out a bad man. He wants to keep that bad character image in public."

The documentary has footage from his latest fight with judo champion Ogava in Nagoya, Japan. 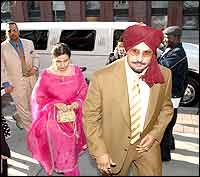 "The result was disputed, challenged and so there will be a rematch," said Tiger. "I have given an open challenge to Ogava, 'I am willing to wrestle you any time, anywhere'."

The fact is "Ogava, a professional wrestler, was carried out of the rink on a stretcher."

The documentary also shows his historic fight with Antonio Inoki in 1975, which drew 60,000 spectators. Tiger won.

The formal screening of the documentary last week was followed by a reception where Tiger, his wife, their three sons and their families arrived in a white stretch limousine.

During the reception "one reporter asked me whether Canada has lost out for not recognising this man," recalled Krishna. "To me that was a real honour because now people see the documentary and say 'how come we didn't know this man before.'"

She produced the documentary "to revive the story of Tiger and making people feel we might have in fact lost out. That's a great thing and true test of a documentary. This is phenomenal and then we are keeping something for history to tell the next generation and from that perspective it is a successful documentary."

"Tiger's life story is a message. It tells you, you can come here with $6 but if your really believe in your dream then go after it. His hard work, his sacrifices, his family all have true spirituality and these are all long-term values."

'I have seen it all  money and fame. Now I want to repay my native village and nation,' Singh told the Asian Pacific Post recently, announcing his decision to set up wrestling schools in Punjab. 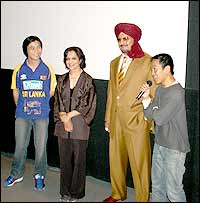 'I left Indian shores for Canada way back in 1971 with just Canadian$6 in my pocket. Next March, my first son was born and I did not have even have C$90 to pay off the bill at the hospital. That initiated me on to the path of hard work. I was able to buy an island, a 100-acre estate, a beach, a lake, soccer fields, tennis courts and a forest where I keep animals and everything else I liked. Being in the money, I have learnt that real happiness comes only by giving to others and seeking pleasure in it,' he said.

This reporter has for several years known Tiger as a family man, always happy with his children and grand children, who all live together on a 100-acre plot in Milton, west of Toronto.

In the basement, they have their own gurdwara, where the family sits crossed legged for their daily private prayers.

His eldest son Mickey followed his father's footsteps by becoming a professional wrestler, but retired in 1998 after a bad injury.

His next son Gary is a police detective and happy what he is doing. The third son is a hotelier.

Many people have now approached Tiger to join politics and contest the coming general election in Canada.

"That's not my cup of tea," he told this reporter. "If I am given some task, some position, to promote my country I will gladly do that any time. But for heaven's sake no politics please!"

Ajit Jain in Toronto
SHARE THIS STORYCOMMENT
Print this article