Why I remain wary of China

I joined the Indian Intelligence Bureau on July 17,1967.

After my training, R N Kao, who headed the external intelligence division of IB, told me that I had been selected to head the Burma Branch of IB. The branch was created after the Sino-Indian war of 1962, and he considered it as important as the branches dealing with Pakistan and China. He wanted me to acquire expertise not only on Burma, but also on Yunnan province of China.

I continued to be in charge of the Burma branch for nearly five years -- handling analysis as well as clandestine operations -- and acquired such expertise that people used to refer to me as 'Burma Raman.'

After taking over, I thought I would familiarise myself with the background to the creation of the Branch, and sent for the relevant file. It was there that I saw a one para hand-written note by BN Mallick, who was director of IB at the time of the war.

'I have discussed with the Prime Minister and the Home Secretary. They have agreed that we must urgently create a Burma Branch. It should start functioning from today without waiting for a formal approval from Finance. Action for obtaining approval from Finance may be taken separately,' it said.

In order to understand why the Branch was created in such an urgency -- almost in panic -- I then requisitioned all Burma-related files of 1962 and the years before from the Record Room (Archives).

From the various notings in these files, I noticed that Mallick and others felt the Indian Army was so badly taken by surprise in what today is called Arunachal Pradesh because some Chinese troops had entered Arunachal Pradesh not directly from the North, but from Yunnan in the East.

They had clandestinely moved across the Putao region of the Kachin state of Burma without being detected by the IB. The Kachin state and the Burma Naga Hills were a no-man's land in those days, with practically no Burmese administrative or military presence outside the towns of Myitkyina and Putao. The Chinese had taken advantage of this.

I then went through all the pre-1962 source files in order to understand how the IB's sources in North Burma had missed this. In those days, whatever roads were there in the Kachin State and the Burma Naga Hills had been blown up by the anti-Rangoon insurgents. The only way of moving about and carrying goods from one place to another was on the back of mules. North Burma had a large Chinese population of Yunanese origin. Many of them earned their living as muleteers.

In the year before the war, the IB's trans-border sources in the North-East were repeatedly reporting about a tremendous increase in the number of mules and Chinese muleteers in Kachin state and the Burma Naga Hills.

The then officers of IB had sent out a wake-up call by drawing the attention of the policy-makers to the national security implications of this development in the areas adjoining the Indian border in Nagaland and Arunachal Pradesh.

But they were ridiculed and accused of nursing imaginary fears -- just as today the IB, Research & Analysis Wing and the National Security Council Secretariat are being ridiculed by some analysts for sounding an alarm about the national security implications of Chinese investment flows into some sensitive sectors of the economy such as telecommunications.

It was realised belatedly that these muleteers were Chinese Army and intelligence officers based in Yunnan, who had taken up position across our border in Burmese territory in the months before the invasion. After the war was over, there was a steep drop in the number of mules and Chinese muleteers in North Burma.

In 1968, the governments of India and Burma agreed to set up a Joint Commission for the Demarcation of the Indo-Burmese boundary except in the northern and southern trijunctions.

Kao spoke to the then Foreign Secretary and persuaded him to include me in the Commission under the cover of a Deputy Secretary of the Ministry of Home Affairs dealing with the North-East.

By that time, Indira Gandhi, the then Prime Minister, had decided to bifuracte IB and create R&AW under the charge of Kao. It was also decided that I, along with the Burma Branch, would stand transferred to R&AW, but I would keep the late MML Hooja, the then Director, IB, in the picture regarding my work.

Kao, therefore, took Hooja's concurrence for my being the joint representative of R&AW and IB in the Commission. My membership of the Commission gave me an opportunity to travel frequently and widely even in the remotest areas of North Burma.

The Burmese replied that they already had aerial photographs of the Indo-Burma bordering areas, and that we could use them as the starting point.

The photographs were of excellent quality. Totally surprised, we asked them how they took them since their Air Force did not have a plane capable of taking such aerial photography. To our shock, they replied: 'Our Chinese friends helped us. We sought their help. They sent a plane of their Air Force to fly over the Indo-Burmese border to take the photographs.'

When we strongly protested against their allowing a Chinese Air Force plane to fly over our sensitive border areas and take photographs without our permission, the Burmese replied: 'We will never let down our Indian friends. We did take your prior permission.'

They then showed us a note from the then Indian Ambassador in Rangoon to their Foreign Office, stating that the Government of India would have no objection to their requesting the Chinese for assistance in the aerial photography.

On my return to Delhi, I briefed Kao about this, and suggested that he should advise the Prime Minister to order an enquiry into how a matter having serious national security implications was handled so casually, and fix responsibility.

Kao replied: 'Raman, the R&AW has only recently got going. We will need the goodwill of the Ministry of External Affairs for functioning in the Indian embassies abroad. By raising this with the Prime Minister, we will unnecessarily be creating hostility to R&AW in the MEA. I will mention this breach of security to the Foreign Secretary and let him decide what further needs to be done.' Nothing further was done.

Years later, I was associated with some aspects of the external enquiries relating to the Mumbai blasts of March,1993.

After the blasts, the Mumbai police recovered a number of AK-47 rifles which had been issued to the terrorists by Pakistan's Inter-Services Intelligence. We gave a list of the numbers carried by the rifles and their photographs to a Western intelligence agency and sought its assistance in determining where and when these rifles were produced.

The Chinese received me warmly, and one of their senior ministers even hosted a dinner for me. After the dinner, he told me that it was correct that the rifles recovered by the Mumbai police had been manufactured in China.

But when I asked him who they had sold these rifles to, he replied: 'Record-keeping in our ordnance factories is in a mess. Very often, they sell arms and ammunition to other countries without keeping a record of to whom they sold them.'

Since 9/11, I have attended four seminars on terrorism -- one in China and the remaining three in other countries -- at which Chinese experts were present. I was invited to speak on jihadi terrorism in Jammu & Kashmir and other parts of India.

In the interactions which followed my presentations, the Chinese experts -- governmental and non-governmental --would keep quiet.

When I asked them for their views on my presentations, they would invariably reply: 'We deplore the death of innocent civilians. We feel sorry for you. But we do not agree with you that what is going on in J&K is terrorism.'

I would then ask them: 'How about jihadi terrorism in other parts of India?' Uniformly, their reply would be: 'We do not have enough information. So, we are not in a position to comment.'

They would keep quiet.

We openly accuse the US of double standards on the question of terrorism and of going out of its way to ensure that no harm comes to Pakistan for using terrorism against India.

The Chinese double standards on this subject are much worse than those of the US. They are even more determined than the US to see that no harm comes to Pakistan. But we never talk about it.

I have been repeatedly stressing since 1994, when I retired, that China was unlikely to settle the border problem with us unless and until we agreed to give it the entire Tawang area in Arunachal Pradesh. They look upon Tawang as the strategic gateway to Tibet and to Assam in the reverse direction.

In their perception, their strategic control of Tibet could not be taken for granted unless and until they controlled Tawang.

If there is instability in Tibet after the death of the Dalai Lama, the Chinese Army would not hesitate to launch a pre-emptive strike and occupy Tawang, if not the whole of Arunachal Pradesh due to fears that the US might exploit the instability, with Indian connivance, from clandestine bases in the Tawang area.

Under the renewed spell of Bhai-Bhaism, or brotherhood, we have so badly neglected the vital national security task of strengthening our position in Arunachal Pradesh and the rest of the North-East that we are in no better position today than we were in 1962, when we faced an avoidable disaster at the hands of the Chinese.

Our nation, our people and our policy-makers have no memory for the painful experiences of even yesterday.

Within two months of the Mumbai blasts of 11/7, we have forgotten about them and are letting ourselves be led down the garden path once again by General Pervez Musharraf. 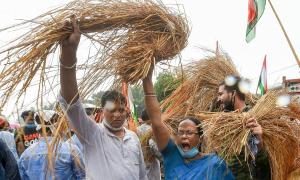