Amidst reports that Pakistan plans to field journalist-turned-diplomat Maleeha Lodhi against India's Shashi Tharoor for the United Nations Secretary General post, US Secretary of State Condoleeza Rice declined to commit her support for a woman candidate, saying she was "gender-neutral."

"The US has not yet decided whom to support," she told reporters in Islamabad Tuesday night when asked by a Pakistani journalist whether she would support a woman candidate for the top post. "I'm all for women being in any and every position possible. But I think that the role of Secretary General is -- that the question of who will become Secretary General will be dealt with over the next couple of months. Let me be very clear the United States hasn't made any decisions itself about who should hold that role," she said.

Not satisfied with Rice's non-committal reply, Kasuri stepped into state that the reporter wanted to know if she is partial to a woman Secretary General. "I heard that," Rice replied with laughter. "And I'm gender-neutral, although obviously I like to see women in any position," she said.

The question was asked in the backdrop of reports in the media here that Pakistan was toying with the idea of fielding Lodhi to oppose India's nominee for the post.

Rice at the same time stressed that she preferred the next UN Secretary General to be committed to UN reforms. "I myself am just hoping that it is a Secretary General who is very committed to UN reforms. The UN is an extremely important institution. It's an institution of which the United States was a founding member, which we rely on for some of the most important issues of war and peace," she said.

"But it's also an institution that, so to speak, is showing its age. It's been in existence now long enough that a lot has grown up that makes it less effective. We really do need to have UN reform and I'm hoping that some of those management reforms will even take place over the next couple of weeks," she said.

Rice also said that Washington would like to seek Pakistan's support for UN reforms. "And one of the points that I will make to my Pakistani colleagues is that we hope to have the support of Pakistan and other G-77 countries for serious reforms of the United Nations".

Asked whether Pakistan raised the issue of extending the US-India nuclear deal to it, she said the issue was expected to be discussed during her talks with Pakistani leaders. "We have not had a chance to discuss that specific issue, but we eventually will," she said. "But we're having very fruitful discussions with Pakistan about how to meet Pakistan's energy needs. This is a question of how to meet one's needs for reliable, safe, clean energy that can support economic growth."

"And I mentioned that the Energy Dialogue took place in Washington just yesterday and Secretary Sam Bodman was himself participating in that, and so I think we're going to continue to have discussions about how to meet Pakistan's energy needs," she said.

K J M Varma in Islamabad
Source: PTI© Copyright 2020 PTI. All rights reserved. Republication or redistribution of PTI content, including by framing or similar means, is expressly prohibited without the prior written consent.
SHARE THIS STORY
Print this article 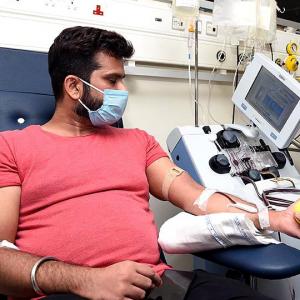