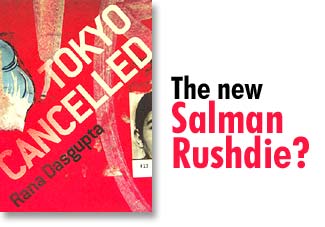 When you emerge, slowly, closing the last page and switching off your night lamp, you will think two thoughts. One, Indian writing in English is not dead; two, Rana Dasgupta could soon force a great many writers to reinvent their approach to the language.

The premise of Tokyo Cancelled  people stranded at an airport telling stories to kill time -- is as simple as it is timeless. Within its vivid pages can be found traces of Geoffrey Chaucer's Canterbury Tales, Giovanni Boccaccio's Decameron, fairy tales by the Grimm brothers and even a hint of The Arabian Nights. Knotted in an awkward circle, surrounded by silent suitcases, the 13 passengers waiting for their flight string out tales that shock you just by their imagination.

"I am deeply indebted, not only to Chaucer and Boccaccio, but to many other medieval storytellers," says Dasgupta. "Strangely enough, they provide a language that seems more appropriate to our age than the realist tradition of the 19th century, because we are also living in a time of magical transformations -- 'learn a language in two hours! Become attractive to women!' -- and spiritual battles.

"And they (the medieval writers) offer us the 'story cycle', a form where the connections between parts are by theme, not by character. It is a form whose dispersed nature seems to work better with our scattered global geography than the novel's centred, all-seeing eye."

The phrase 'scattered global geography' is telling. Dasgupta's tales may reach far beyond the commonplace, but they have extremely valid comments to make on our position in a shrinking, fractured world. The 33 year old is qualified to comment too, considering his years spent in various corners -- born in England, raised in Cambridge, stints in France, Kuala Lumpur and New York, and currently living in Delhi. The tellers of his tales reflect this life in transit, drawing all kinds of stories from the world's great cities.

In one night, Dasgupta encapsulates the cultural topography of a planet.

I ask him what aspect of this literary landscape he would ascribe to living in India (he moved to Delhi in 2001). "I think one of the things European societies have successfully done is suppress the deep contradictions between different forms of life beneath an apparent consensus," he replies. "Living in India has made it much more difficult to believe in such generalisations. I've become much more interested in the amazing variety of ways by which people imagine the meaning of life."

And variety is what Tokyo Cancelled gives you in immense doses. There's the story of Japanese businessman Yukio, who falls obsessively in love with a doll he has created. There's Robert De Niro's son Pavel and his girlfriend Isabella, unhappy souls who suddenly find cookies that can transform matter. There's Natalie, the Ukrainian trader, who finds her lost lover Riad with the help of a wingless bird born in his throat. A 'memory editor' hired to sift through people's memories and create software called MyPast for a generation forgetting its past. An insomniac Indian billionaire who dares play with genetics for want of a child

Some may point out that the thread connecting these stories is flimsy. But that flimsiness, I would assume, is precisely the point. Even the themes of The Canterbury Tales -- deceit, courtly love, greed -- varied greatly, as did the styles they were documented in. What they all had in common was the need to present the virtues and faults that define human nature.

While Dasgupta's commentary on a fast-shrinking globe comes through clearly, his vision is far from positive. "You're right that there is a cynicism about the real meaning of our globalisation," he says. "And yet, the whole premise of my book is utopian: that diverse strangers in an airport might find a wonderful language to communicate with each other."

So, in that sterile space, a non-identifiable airport, these strangers sit and talk into the night, using their unimaginable stories to learn more about themselves and the world they live in. By the time you finish listening in, you learn something too. You learn how elusive the concept of globalisation really is, for example; how it appears to bring people closer, yet manages to maintain boundaries. It becomes clear, then, that the writer's use of a highly symbolic language is apt.

"This is simply how the world strikes me," he says. "It's also to do with the search for a language that can gather many contradictory things into itself." He also refers to his writing as film-like. "I like the idea of the 'cut' in film, the idea of stopping just when enough has been said and starting off again in a new direction. It makes for a concise language, and one full of gaps in which the reader's imagination does all the work."

That Tokyo Cancelled has struck a chord is evident, raising the possibility of Dasgupta being labelled the next big thing in Indian fiction. That promise is something only his next novel may fulfil. And yes, he has been working on it for some months now. If stray reports are anything to go by, it's about a modern-day prophet losing contact with his world.

Despite rumours of a huge advance, Dasgupta grumbles a little: "I was much better off before I gave up gainful employment to sit in a room and write books."

I'm glad he did though.