Besides weighing the police evidence and arguments against it, many factors complicate the Godhra issue. This is the third and final part of the series on the Politics of Evidence.

Part I: The Politics of Evidence 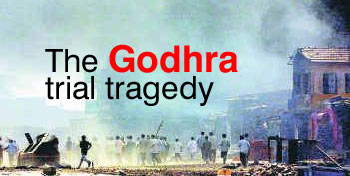 When Godhra happened, Kandarp Trivedi was a police inspector from Godhra town, under whom Signal Falia, near the Godhra railway station, falls. He told rediff.com February 28, 2002, "We never go to Signal Falia. We don't police that area. It's full of rogue elements."

Trivedi told this correspondent that the Ghanchis (a largely uneducated and poor community) of Signal Falia have close knit relations with their relatives in Pakistan and they prefer products from Pakistan. Their children, he said, like toothpaste from Pakistan.

The Signal Falia area, from where a crowd had come and gheraoed the S-6 compartment, was 'outlawed' for the local police. On the night of February 27, 2002, instead of conducting a professional investigation, the local police team picked up whoever they could and put them behind bars. The local police did not have a network at Signal Falia to get reliable human intelligence.

The first eight to 10 weeks of investigations in the Godhra case were shoddy and unpardonable.

P P Agza, who was inspector general of police, crime, and K C Bawa, deputy superintendent of police, did not conduct a thorough investigation, probably as they were due for retirement. Bawa was reportedly under pressure with a proposed departmental inquiry into his alleged investments.

Junior police officers, to please their political masters, kept on increasing the 'statistics of arrested Muslims' in the case. Reporters were witness to the Godhra police February 28 and 29, 2002, picking up 'miscreants' from Signal Falia.

Bawa's testimony before the Nanavati Commission exposed the shortcomings of his team's initial investigation.

Gujarat Chief Minister Narendra Modi, the much-hailed and much-maligned hero of Hindutva, did not ensure that a swift and efficient investigation.

His Home Minister Gordhanbhai Zadaphia, a Vishwa Hindu Parishad activist, was overwhelmed by the event and proved to be a disaster as the riots spread.

He and Ashok Bhatt, then the health minister, kept 'ordering' the police to arrest more Muslims from Signal Falia. They told the police to 'show quick results' to send the politically correct message to Hindus.

Under the circumstances, many Muslims arrested in the early days of the investigation were probably not involved in the conspiracy.

A police officer had told me in Godhra, "They (petty criminals of Signal Falia, who were part of the mob) will be released once charges are framed."

Those days, the atmosphere in Gujarat was so communally charged and divisive that even the release of innocent Muslims would have invited popular wrath.

Most of the accused, in jail under POTA, were part of the crowd who rushed towards the Godhra station on hearing a rumour of the kidnapping of Muslim girls by kar sevaks. They should have been tried for unlawful assembly or rioting.

Most of the 50 Muslims who were arrested in the first round have been made part of a larger conspiracy, which is unfair to them.

It is a tragedy of the Godhra trial that the Muslims who may have been part of the mob (in the days to follow, more than 1.2 million Hindus were part of mobs when the riots broke out) but not part of the greater conspiracy of the carnage are facing POTA charges.

Gujarat's police and politicians are aware of the injustice but they want the POTA court to release them only after framing charges in the Godhra case.

The investigators know that except for about 30 Muslim accused, who form the core group and who allegedly planned the torching of the compartment, the others are not 'conspirators' but merely 'miscreants.'

Modi does not have the political guts to admit it as he can gain political mileage out of his Hindutva image, with the prosecution not taking a stand to segregate the accused of Godhra.

If the POTA charges are dropped against some of the arrested Muslims, who are 'on record,' shown merely 'as present in the mob,' 70 percent of the arrested will be out of POTA's ambit. They would have got bail a long time ago under normal criminal law.

Before a stay on the Godhra trial was imposed by the Supreme Court, a senior police officer said, "When the charges are framed by the POTA court, the accused (more than 70) will get a reprieve."

Judge Sonia Gokani began the framing of charges in the POTA court in Ahmedabad. The accused, suffering because of the complicated process of POTA, would have been set free. But a petition by social activists, and another by the National Human Rights Commission to transfer the Godhra trial case outside Gujarat, led to a stay on the trial.

The stay delayed their bail process.

Firoz Khan Pathan, an accused, was 'merely part of the mob.' Today, his mother and wife beg on the streets of Kalol, where they have been relocated from Godhra.

Fakhruddin, another accused, who was 'merely part of the mob,' according to a police charge sheet, died in prison.

The conspiracy theory in the current form came only after Deputy Inspector General of Police Rakesh Asthana's arrival.

On April 11, 2002, Asthana took over the investigation. Noel Parmar was his deputy. Asthana's team went through the evidence collected from the site.

He reordered examination of the Forensic Science Laboratory (Ahmedabad) report. They conducted a simulation exercise in Godhra. They reported that the S-6 compartment was burned from inside and more than 60 liters of petrol were used.

Simultaneously, Asthana conducted the 'mapping of time' of the Sabarmati train. He reenacted the event to note the timing of the train's speed after it left the platform and was forcibly stopped near cabin A.

When the chain was pulled, in the manner described by witnesses, the train stopped at cabin A, where it was burned on February 27, 2002.

As Asthana got deeper into the conspiracy theory, it became obvious his predecessors goofed up or had not acted professionally.

Another aspect that cannot be ignored is then railway minister Nitish Kumar's role.

The Justice (retired) U C Bannerji report mentions a failure by the Commission of Railway Safety and Railway Administration to conduct a statutory inquiry into the incident.

Nitish Kumar has probably followed the blind path, or taken a convenient route, with the views of Bharatiya Janata Party leaders of the then National Democratic Alliance government.

The Gujarat government had declared the setting up of the commission six days after the incident. The Railways could have done a quick, primary survey.

How did the Railways, a commercial enterprise, not have learned a lesson on the safety of its trains after such carnage?

One explanation is that the Railways Act makes an inquiry mandatory when an accident occurs. But here, they prejudged the issue on the very first day and took a position that the fire in the S-6 compartment was anything but an accident.

Initially, in the Railways official papers, they termed it as an activity by miscreants, without conducting an inquiry.

Nitish Kumar takes refuge under Section 119 of the Railways Act. The section says that once a commission is announced under the Commission of Inquiry Act, no departmental inquiry can be held by the railway ministry and any ongoing inquiry should be discontinued.

Legal opinion is divided whether the Bannerji Committee has legal sanction.

It is Asthana's investigation that the Gujarat government is sticking to. In view of the reality, has any Railway official or police officer been held responsible for the sloppy police investigation in the initial few weeks?

Why has a professional review of the arrested people -- on the basis of the initial theory of investigation -- not been done?

The Godhra investigation also comes under a cloud because of the complete lack of motivation of the Gujarat police to investigate with the same vigor cases of Naroda Patia, Best Bakery or Gulmurg Society.