The year that transformed Indo-US ties 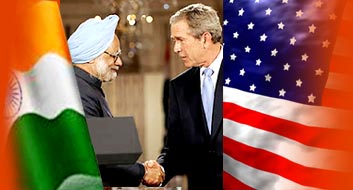 The year started off with a visit by President Bush to the Indian embassy here to sign the Condolence Book for tsunami victims and declare that both countries will address the natural calamity in a coordinated fashion. What transpired between January and December in the realm of bilateral ties is something that neither side would have anticipated given the depth and the width of accomplishments.

Clearly, in spite of all those important exchanges, visits and pacts, the only aspect that stands out is the July 18 understanding between Prime Minister Singh and President Bush, especially as it pertains to the civilian nuclear cooperation envisaged between the two countries.

Along with this giant step, that requires changes in US law, comes the full realisation that it is not just a historic moment in bilateral ties but one that is full of challenges and opportunities down the road.

And with the challenges and opportunities are anticipated misgivings, apprehensions and occasional hiccups, none of which are expected to derail the process that has been set in motion.

From the Bush administration's point of view, the civilian nuclear understanding is a 'win-win' for both India and the US. This in spite of constant reminders of the 'separation' of civilian and nuclear facilities, the tightening of export controls and transparency during the process are the critical factors and ones that are not easy.

But the fact is that the US understands -- even if it cannot fully acknowledge -- New Delhi's track record when it comes to proliferation of weapons or technologies. It is one reason why the Republican administration has made it clear publicly that what is being offered to India in the realm of civilian nuclear cooperation is exclusive and that laws that are to be amended are going to be India-specific.

Since July 2005, the Republican administration has been trying to go about drumming up support domestically from a Congress that is miffed at being left out in the first stages.

One of the queries raised is what Washington is going to do if Beijing or Moscow goes about their own ways with 'their' commercial or interested partner. There are real questions if this Bush White House has enough political muscle to get the deal through Congress, given not only its troubles on Capitol Hill on non-India related issues but also if it has strength to take on those who are adamantly opposed to this. And those who have the power of persuading key Congressional leaders.

Quite apart from the civilian nuclear arrangement, the year 2005 also had other notable events and landmarks not just confined to the realm of politics and political issues.

India and the US embarked on some ambitious agenda in the fields of defence, missile defence and civilian air services while generally stepping up the economic dialogue.

The first half of 2005 saw high profile visits by US Secretary of State Condoleezza Rice to New Delhi in March, which was only to be followed by the then external affairs minister K Natwar Singh's visit in April and Defence Minister Pranab Mukherjee's trip.

One of the key aspects of Mukherjee's visit was the signing of a 10-year 'defence framework' agreement that spoke of a 'new era' in bilateral ties, including in areas of multilateral operations, expanding two-way defence trade and setting up of the Defence Procurement and Production Group which will be under the aegis of the Defence Policy Group.

Important still in the areas of bilateral cooperation was the meeting of the Joint Working Group on Space in Bangalore where both Washington and New Delhi discussed ways to expand cooperation in civilian space programmes.

The notable things that have taken place in 2005 include the collaboration on the Expansion of Vision Research, the Indo-US Joint Naval Exercises of September and coming into force of the Mutual Legal Treaty of Assistance.

In October, India and the US signed the S and T Cooperation Agreement with a meeting here between Rice and the visiting Minister for Science and Technology Kapil Sibal.

Sridhar Krishnaswami in Washington
SHARE THIS STORY
Print this article