Can the Chinese ogre be peaceful? 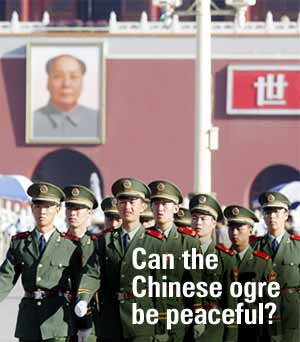 Hu Jintao and his Fourth Generation colleagues coined a new one: 'The Peaceful Rise of China.'

'The 'Peaceful Rise' notion indicates China has chosen an unprecedented development road different from one ever walked by other countries that rose in the last few centuries,' Xinhua News Agency explained in April last year.

During the annual Bo'ao Asia forum held in Hainan province last year, Chinese President Hu Jintao used the word 'peace' 11 times in his inaugural speech. According to Xinhua, it was a way to answer 'the people who may be truly worried for genuine reasons and those who may just want to advocate the 'China threat' for other motives.'

Do not worry about the 'rise', says Beijing: 'It will take time for China to be a real big power.'

It would take China 40 to 50 years to reach the level of development of the United States, and those who advocate the 'China Threat', are just jealous or ill-intentioned towards the Middle Kingdom. 'For those who choose not to listen, there's really no answer to whether 'peaceful rise' is possible.'

Beijing believes that the 'China threat theory' was started in the US 'to make sure no one can challenge (the US) dominance in the 21st century.'

However for us in India, this 'peaceful rise' sounds like a new avatar of the Panchsheel policy of peaceful coexistence.

'The idea that the world, including other major counties, can live side by side with a rising giant as a peaceful partner to do business with, not a big bully for others to contain or fear for. They can share China's development dividends,' the Chinese leadership declares in each and every international fora.

The trigger to the new Chinese slogan was probably a report: 'Indo-US Military Relations: Expectations and Perceptions' commissioned by the Pentagon and released in early 2004.

According to the US department of defence analysts, the US and India should be forging a long-term defence and security alliance aimed at containing China: 'China represents the most significant threat to both countries' security in the future as well as an economic and military competitor.' The officials and retired defence personnel interviewed for the report believed that India could be a 'balancer' to China in the decades to come.

Another reason was put forth in The Economist by William Callahan of Britain's Durham University. 'The peaceful rise notion could be read as a hidden threat. Should the world not recognise China's new status, runs the implication, an upswell in Chinese nationalism will result,' he argued.

Probably both reasons are valid. The point is that one year later, the 'peaceful rise' has not translated into facts. And this does not augur well for India.

Presenting his ministry's budget at the annual session of the National People's Congress, Finance Minister Jin Renqing announced that he proposed to raise the military spending in 2005 to 244.65 billion yuan ($29.5 billion), a hike of 12.6% from the previous year.

Over the last 15 years, most of China's 'official' military budgets have increased by double digits. In 2001 and 2002, defence spending rose by some 17 percent.

Furthermore, if one is to believe the CIA, China's 'official' military budget is 'less than half of China's actual defence spending.' Some analysts believe China's actual defence spending could be up to three times more than its 'official' figure. Beijing does not include new arms purchases as well as research and development in new weaponry in the budget, they point out.

For India, the most important aspect of China's hidden budget is the railway line to Lhasa which will tremendously improve of China's capacity in case of a conflict with India. The Chinese have openly declared that the railway was meant to 'strengthen their borders.'

Is this different to the massive building of roads in Tibet in the fifties which was undertaken 'to liberate Tibet and protect the Western borders'? This type of expenditure, which led to the 1962 War, does not figure in the Chinese defence budget.

In a white paper on defence published in December, China explained that the ongoing military modernisation was aimed at squashing 'Taiwan independence forces.'

Beijing made clear that any attempt at independence would be dealt with militarily. 'Should the Taiwan authorities go so far as to make a reckless attempt that constitutes a major incident of Taiwan independence, the Chinese people and armed forces will resolutely and thoroughly crush it at any cost.'

It was China's 'sacred responsibility to stop Taiwan independence forces from splitting the country.'

Since then China has passed a legislation to officially authorize the Beijing government to use force.

NPC deputies burst into a storm of applause and the law was ratified on the spot by President Hu Jintao. The law is meant for 'achieving national reunification through peaceful means, and taking non-peaceful means to stop Taiwan's secession from China by the 'Taiwan independence' secessionist forces,' Xinhua explained.

So much for the 'peaceful rise of China.'

During the same period, India had only a very marginal raise of its defence budget. In prevision to the scaling down of the budget, Defence Minister Pranab Mukherjee had to write to the Services headquarters asking them to cut down their demands; the social sector commitments had absorbed most of the budget increase.

In fact the budget raise has been so marginal, that with the current allocations, two naval deals with Russia and one IAF deal with France will have to be postponed while the army will lose three projects with Russia and Israel.

But, apart from the defence forces, nobody really cares about China in Delhi.

The cricket series with Pakistan is on and China is far away and peaceful.

In any case, Wen Jiabao, the Chinese premier who is to visit India April 9 to 12 declared during his annual press conference: 'China and India are not rivals but friends, both countries shall work together to tap the potential of bilateral cooperation and find a 'fair, reasonable and mutually acceptable plan' to solve the border dispute.

The 700 reporters attending the conference applauded in unison. Touched, Wen told the journalists: 'I hope you can send my message back to the great Indian people, that we're not competitors, we are friends.'

His message about the 'peaceful rise of China' will be conveyed, particularly in Europe, where the EU is very keen to lift the arms embargo clamped on China after the 1989 the Tiananmen massacre.

The spokesperson of the French ministry of foreign affairs could not even understand a journalist's question when the latter asked if there was any link between the military budget increase, the anti-cessation law and the lifting of the embargo.

Probably the Europeans believe that their weapons will only be for China's 'peaceful rise'!

In February, Douglas Feith, the under secretary of defense for policy, had declared that the rise of China will be one of the most important issues being examined in the 2005 Quadrennial Defense Review, the formal assessment of US military policy review.

But today, Washington's primarily objective is not to lose their future Chinese arms market to the EU.

Back in India, the media is happily biting the bait of Wen's 'peaceful' words.

While the wise men of India talk and sleep

As for the border issue, Wen wanted 'a fair reasonable solution that is acceptable to both sides. It should also be found on the basis of equal consultations, mutual understanding and mutual accommodation, respect for history and accommodation of reality.'

But while drafting the 'guiding principles' to solve the vexed issue, the Chinese side insisted on getting 'back' parts of Arunachal Pradesh, particularly the Tawang area. Can this be considered as a fair and peaceful solution?

And what about the train which will be reaching Lhasa in two years?

An interesting piece in a recent edition of The New York Times says: 'Major government-controlled newspapers published identical transcripts of his comments on Tuesday, identical to each other, that is, but not to what he said at the news conference.'

The US paper suspected that the premier had been censored by China's propaganda department which is still today more powerful than the premier.

However, Wen's 'peaceful' remarks were not changed: it remains the official policy of the People's Republic.