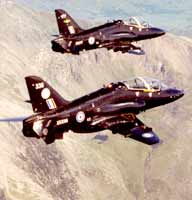 The chilly winds that hit the northwestern shore of Wales beat down any tree trying to grow tall. So crooked trees and broken branches merge with breathtaking meadows, tranquil beaches and complex mountain stretches to form the sprawling Royal Air Force Valley in this cold corner of the United Kingdom.

This complex on the western coast of the Isle of Anglesey, where the RAF trains its fighter pilots, was a secret for 25 years, until the British Broadcasting Corporation was allowed early this year to film the challenges of almost a million pound-training that converts boys into fighter pilots.

It is here that a four-year programme to train Indian Air Force pilots will kick off on July 5.

The training is a critical part of India's £795 million contract for Advanced Jet Trainers signed with the British government and BAE Systems, manufacturers of Hawks.

Lieutenant Commander Rod Frederiken, who shot down an Argentine fighter on day three of the Falkland War to claim his place in history, and one of the instructors on the simulators in the complex, eagerly awaits his Indian students.

The last time he interacted with Indian pilots was while flying off the deck of the INS Vikrant, originally the British carrier HMS Hercules, the now decommissioned aircraft carrier-turned-maritime museum off Mumbai.

"Indian pilots are a competent lot. I am sure these boys will be no different," he says.

Masons and carpenters are working at a furious pace to complete a building to house the IAF trainees and their liaison officer.

Outside, RAF officers are ready with the new curriculum.

Before arriving in Wales, the Indians would have trained in the slow moving Kirans and learnt a bit about tactical weapons.

Instead of MiG-21s, called 'flying coffins' for their high accident rates, the Indians will now learn to fly on the Hawks, the world's most produced AJTs with an impressive safety record. That will be the procedure till 2008, when the Hawks will be fully integrated into the IAF.

"We are excited about the opportunity," says Group Captain Mark Green, station commander of the facility.

"The entire programme will complete on February 22, 2008, with four courses a year," says Group Captain Green. "And each course will have six Indian pilots."

Each student will be provided with a laptop containing the aircrew manual, lectures, and other notes.

"The guys will be fitting into the standards of the station. I see them no different from RAF students," says Group Captain Green. 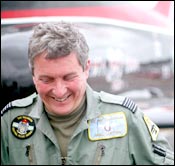 Wing Commander Nigel Clifford (right), the commanding officer of one of the two squadrons at RAF Valley, was among the officers who visited India to study how the Indians train and what syllabus they follow.

"We have set up a syllabus and training based on what the IAF do. If the IAF want any change as we go along we can amend (it). It is a partnership, we grow as we go along," he says.

There are differences in the way the two forces train.

The RAF no more teaches air-to-ground firing of rockets, has more advanced instrument flying than MiG-21s and there are differences in weapons, says Wing Commander Clifford. "We are very, very open to feedback."

To monitor the training and improvements required, if any, the IAF will depute a squadron leader to Wales.

IAF chief Air Chief Marshal S Krishnaswamy is expected to arrive in Wales on June 30 for updates and briefing.

"We build capacity here. They take it home and put it to work in an aircraft," says Wing Commander Clifford.

The British officers say this will be the biggest training programme ever conducted by the RAF for a foreign nation.

"We are also trying to help them to have a comfortable stay and fun-filled days," says an officer involved in looking after the IAF pilots. He is drawing up plans to help them visit temples, gurdwaras or mosques, and to interact with the Indian community in the region.

"We will ensure that they very smoothly adopt to the new environment," says the RAF officer.

Group Captain Green says the trainees will have to first get used to the "air space structure" and to the "weather -- we tend to fly in fairly poor weather."

To aid the trainees modern Instrument Landing Systems are in place, which they do not get to use in India.

Each Indian will fly 120 hours, including 12 hours with an instructor. They will be on simulators for 61 hours.

The British trainees fly for 150 hours.

The Indians would have flown 60 hours by the time they land at RAF Valley.

"We are going to have exactly the same standards, exactly same instructors," says Group Captain Green.

Wing Commander Clifford, at whose 208 Squadron the initial training will take place, says the Indians will be first put through the Internal Rating Test, which will give them a certificate to land at any British airport.

To fly over the complex topography and the sea surrounding Wales is no mean task. The pilots are expected to wear lifejackets over their G-suits, and during winter waterproof suits to protect against the freezing waters of the Anglesey. In winter the pilots will also be provided plastic socks.

"All sorties they do will have written assessment," says Wing Commander Bentley. The assessments will help the IAF decide if the trainees should be allotted single seat or double seat fighters.

A few flight hours away, at the BAE Systems' plant in Warton, executives are confident of supplying Hawks in time. "The existing commitment of Hawk is for South Africa, Canada and RAF in UK. There is capacity to build parallel," says Peter Anstiss, a BAE executive and managing director, Typhoon Export Programme.

Typhoon is the Eurofighter developed by Britain, Spain, Germany and Italy, capable of multi-roles and touted as one of the best in the world.

Anstiss says the technology transfer, under which later Hawks will be built by Hindustan Aeronautics Limited, should be smooth. "We will build on the earlier experience like the Jaguar programme."

It has been over two decades since the IAF first began demanding an AJT to smoothen out the transition of pilots from slow moving trainer aircraft to supersonic fighters. But politicians, inept bureaucracy and, sometimes, senior air force officers managed to stall the acquisition.