Sign in  |  Create a Rediffmail account
Rediff.com  » News » 'If India does not give us our land we will go to war' 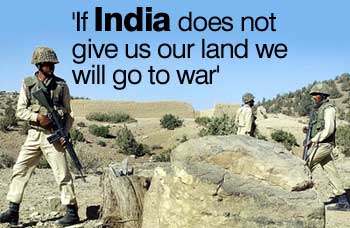 Retired Lieutenant General Hamid Gul, former head of Pakistan's Inter Services Intelligence directorate, tells Contributing Editor Sheela Bhatt that the only reason Pakistan does not dismember India is because "we never wanted to create problems with our Muslim population in India." A startling interview that gives a glimpse of the Pakistani mindset, something that will confront Indian diplomats as they begin peace talks in Islamabad on Sunday.

Part I of the Interview: 'We are walking into the American trap'

What are your views on reports indicting Pakistan for nuclear proliferation?

Why should Pakistan be apologetic about it? Nuke proliferation started because of the US and Russia who have been distributing nuke technologies to their favourites. Israel is a undeclared nuclear power. Whether Pakistan has proliferated or not is not an issue at all.

The important question is does a small country like Pakistan having bad experiences with India and three wars have right to possess nuclear weapons or not? The cause of war still exists over Kashmir. And we have not signed the proliferation treaty.

How can you justify nuclear proliferation?

Why are the Americans then distributing it to Israel? I fear the Americans will demand the joint custody of Pakistani nuclear assets. Or they may say that Pakistan will have to roll back. I remember when Morarji Desai was prime minister of India, it first came out that Pakistan has an Islamic bomb. Desai said, 'How does it hurt India? We have one and they have one.' It's a legitimate desire of any nation to provide for its security needs.

Even America is not afraid of the Pakistani bomb. It is Israel that is afraid of Pakistani nuclear weapons.

But President Musharraf has sided with America.

(Interrupting) Under duress. I don't think his heart is in it. He has the same genes which I have. He was my student, he was my subordinate in the Pakistan army. We have served together. How can he be pro-America?

Is Musharraf anti-Indian as some people claim?

If you put aside Kashmir no Pakistani is anti-India. We like peace with India but not without settling Kashmir. Kashmir is Musharraf's only problem.

What is the bigger issue? The American threat or Kashmir?

You can't put it like that. We have to fight the American threats together. But it is not possible to surrender Kashmir to fight America together.

But India and Pakistan's case is different. America is already on Pakistani soil.

Why are you anti-India?

I am not anti-India. I am against the imperial streak in the Indian psyche. The 1947 riots had a deep impact on my mind. The Indians always lean towards imperial powers. Look at your special relationship with Jews. And now you are with America. Jinnah was right when he invited Ambedkar to join Pakistan. About 5% to 6% Brahmins dominate India. Where are the lower classes?

How do you define your own ideology?

I am an Islamist. Islam is the final destiny of mankind. Islam is moderate, Islam is progressive. Islam is everything that man needs. It is not necessary to become a Muslim but it is necessary to adopt the principles of Islam. Naseem Azavi and Iqbal's writings have influenced my thinking.

How do you see the future of Benazir Bhutto and Nawaz Sharif?

Pakistan's future will lie in the hands of those who oppose America and who take a stand on Kashmir. Benazir will have to oppose Musharraf who is seen as pro-American. Unless she changes her stand of pleasing Americans, she has no political future. Pakistan has to redeem dignity and honour, which we have lost to the Americans.

What will be the minimum demand from Pakistan to India over Kashmir?

Musharraf is saying he expects the Chenab line to be accepted by India. Many Pakistanis might go with him but would Kashmiris agree with them? Also, our discomfort over the leaks of proliferation must not ease India. Dr (A Q) Khan is our hero. Nobody can dare touch him.

If India has a problem with Pakistan why don't you give Kashmir to Kashmiris? Indians have a deep-rooted prejudice against Pakistanis. Not one Indian intellectual is ready to say that let Kashmiris have freedom.

As ISI chief you have observed India. Do you still feel India can give their land to Pakistan?

India will. India will give its land when it will be divided into many pieces. India will have to be break. If India does not give us our land we will go to war and divide India. This time America helped India.

When you were ISI chief you were closely monitoring India

(interrupts) We never wanted to create problems with our Muslim population in India. Otherwise, believe me, India is so fragile. India has such weak joints that if we want we could strike these weak joints then India will dismember. But we don't want India to break.

India is ridden with problems. I am not talking about Muslims. There are many other weak joints. Indians have strong fissiparous tendencies, which is absent in Pakistan. One can easily exploit it politically. Because of Indian Muslims it is not in our interest to break India.