'We are walking into the American trap' 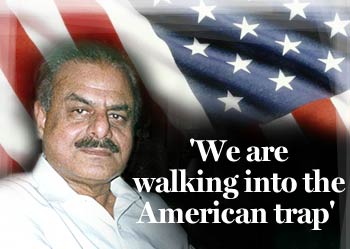 Born in a mud hut to a farmer in Sargodha, Punjab, retired Lieutenant General Hamid Gul went on to become head of Pakistan's Inter-Services Intelligence directorate during then prime minister Benazir Bhutto's tenure. He played a pivotal role in creating the problems India confronted due to Pakistan's State-sponsored terrorism.

B Raman, one of India's leading experts on Pakistan, recalls how Gul actively backed Khalistani terrorists. "When Bhutto became prime minister in 1988," Raman says, "Gul justified backing these terrorists as the only way of pre-empting a fresh Indian threat to Pakistan's territorial integrity. When she asked him to stop playing that card, he reportedly told her: 'Madam, keeping Punjab destabilized is equivalent to the Pakistan army having an extra division at no cost to the taxpayers.'"

"Gul strongly advocated supporting indigenous Kashmiri groups," adds Raman, "but was against infiltrating Pakistani and Afghan mercenaries into Jammu and Kashmir. He believed Pakistan would play into India's hands by doing so."

In an extensive interview to Contributing Editor Sheela Bhatt at his luxurious villa in a military compound in Rawalpindi, Gul provides Indian policymakers with a glimpse of the problems that lie ahead in winning peace in South Asia. Part of this interview was first published in India Abroad, the largest circulated newspaper for the Indian-American community, which is owned by rediff.com

How do you perceive the latest peace initiatives between India and Pakistan?

The SAARC meeting has certainly been different because America has arrived in the region, and both countries are alarmed. Pakistan is used to dealing with America; India is not. When (India's Prime Minister Atal Bihari) Vajpayee says 'new questions have arisen,' he is referring to America's belligerence, its arrival in the region and its desire to control energy resources in Asia that rightfully belong to us.

What are the problem areas you see post-SAARC?

Pakistan wanted to use the instrument of SAARC and other development issues as a peripheral arrangement in order to find a way to solve the Kashmir problem. But I have my misgivings. I think India wants to bypass the Kashmir issue to get to Central Asia. India also wants to ward off America's attempt to intervene directly in the Indian subcontinent.

India also has an energy problem -- it imports 70 percent of its energy. If America is going to regulate the energy tap of Central Asia, they are going to indirectly regulate the growth of the Indian economy, which is linked to India's political destiny. So India wants to build up her security arrangements. I have been discussing these issues with the Indians. The British ruled us by dividing us. Now America wants to dominate the world.

What is the solution to the Kashmir problem?

(Pakistan President Pervez) Musharraf and Vajpayee are trying to settle the Kashmir issue out of court. The court, in this case, are the people of Kashmir.

But India's Deputy Prime Minister Advani is talking to the Hurriyat Conference.

Yes, but what is being worked out by Pakistan and India right now is a division of Kashmir and I am not for it. Will the people of Kashmir accept it? Kashmiriyat is 700 years old and India and Pakistan, in their present forms, are just 56 years old.

Could the Line of Control could turn into an international border?

India thinks so. America is apparently supporting this notion, but their underlying motive is an independent Kashmir. Two days before Vajpayeeji arrived in Islamabad, he made a significant statement. He said Pakistan would have to drop the idea of taking over the Muslim majority area of Kashmir. This means he does not accept the Chenab Line (The formal division of Kashmir along the Chenab river, as proposed by Pakistan-occupied Kashmir Prime Minister Sardar Sikandar Hayat last year). He says India will not accept another communal divide. But neither Azad (Pakistan-occupied) Kashmir nor the people of Pakistan will accept the division envisaged by India. It is in our blood.

What if Indians don't accept any part of Kashmir going to Pakistan?

Musharraf says he expects India to accept the Chenab line. Many Pakistanis might support him, but will the Kashmiris agree? The Indians leaders are in trouble because of Article 370 of the Indian Constitution (which gives special status to Kashmir). The Chenab formula is not acceptable to India because, in that case, how will you maintain your armed forces against China, which is America's requirement more than India's?

Right now, India and Pakistan are settling Kashmir over their heads. The Kashmiris will be bitter and up in arms; they will express their opposition.

But Advani is talking to the Kashmiri leaders.

Yes, it is a positive sign. But what will come out of it? More autonomy to Kashmir than any other Indian state is not acceptable to Pakistan. India's army chief General (N C) Vij has said there are 2,500 freedom fighters in Kashmir -- he calls them infiltrators. They will kill some 7 or 8 (people) per day so that means the movement will be crushed by the time-frame of September 2004. Musharraf has given a commitment to India that there will be no infiltration from Pakistan's side. How will India judge Musharraf's sincerity?

By looking at the actual situation on the ground.

Right. Around September 2004, if actions (killings) go on in Kashmir then India will allege that Pakistan has not honoured its part of the deal so Pakistan is in a trap. If that happens, India will go back on the deal. If Kashmir is sold out like that we will have transferred the battle from Kashmir into Pakistan. That is going to destabilize Pakistan.

How do you analyze 9/11's impact on Pakistan? We were caught on the wrong foot. We had been supporting the Taliban and the Americans were quiet about it because the (American oil and gas major) UNOCAL lobby was working. I have been saying that 9/11 is the creation of America. To slap sanctions on Afghanistan they started spreading baseless allegations against Osama (bin Laden).

When did you meet Osama for the first time?

I met him for the first time in Sudan in December 1993. Then again in 1994 we attended a conference of Afghan leaders in the Middle East. He was soft-spoken with flashing black eyes. He doesn't look like a blood-feasting terrorist. America is not able to catch him only because Allah doesn't wish so.

How strong is Osama and Al Qaeda now?

Given the situation in Iraq, Osama's cadre must be swelling rather than diminishing in stature, in confidence and in organization. These Arab mujahideen who were in the resistance movement against America are not products of madarssas. They are highly educated and belong to rich families. They are going for jihad in far off places like Bosnia, Chechnya and Afghanistan. In these places they were aliens -- culturally and linguistically and in many other ways. But now, Iraq is a God-send for them.

What will happen in Iraq now?

The Shias and Kurdish elements were apprehensive about possibility of Saddam coming back to power as a result of their movement against America. Now that Saddam has gone these people feel free to fight against America. But before America is defeated in Iraq there will be a lot of turmoil in American society.

Two things will happen before America is forced to withdraw from Iraq. One, their control over the energy situation will go and Israel will be exposed to threats from all directions. Will Israel lobby allow America to pull out? America will not pull out of Iraq unless it is totally drained out. So when America goes it won't be a wise decision taken within time but a belated decision which will wreck America. Anyway, they are building the cantonment in Iraq for the next 20 years. That's the reality. They will remain in Iraq till the energy is exhausted and then Americans will move on to the Caspian Sea area where the future energy source lies.

What do you think of the Americans, with whom you have been interacting since the days of the Afghan war?

Individually, they are very good. Americans are very easy to deal with. But collectively there is a dark impulse somewhere in policy making. That always comes out sharply when you deal with them. They want to dominate. They are cowboyish. They want to have things their way. They haven't had any real opposition so far and that has been a tragedy. They have not experienced an imperial setback so far. The real one perhaps, just a small glimpse of it, was 9/11.

What are 3,000 tragedies? We have had 300,000. We have gone through the trauma of India-Pakistan division. America has not matured as a nation.

But you cooperated with the Americans in Afghanistan. When and why did you turn against them?

First of all, I was not dealing with them as an individual -- we were working jointly in an operation. It was a task we were performing. I turned against America because they betrayed the Afghan nation. Afghans are great, very proud people. They are a gift to this world. Their tribes, their tremendous assimilation power, and their lust for freedom make them distinct. I love them.

You are said to have created the Taliban, and are often referred to as their godfather.

I didn't create the Taliban. This is an Ahmed Rashid (journalist and author of a book on the Taliban) saying. I was a friend of (Gulbuddin) Hekmatyar, (Burhanuddin) Rabbani and many Northern Alliance leaders like (assassinated Northern Alliance leader) Ahmed Shah Masud. I was trying to broker peace between them in my individual capacity. They are wonderful people but very difficult to deal with.

Any Afghan is a soldier, a politician, a businessman and a mullah rolled into one. And you can't move them from the part they have set for themselves. They have the best and some of the worst human traits in them. And undoubtedly they are treacherous when they deal with an enemy. Masud was my good friend. He was a tactician par excellence. He had a sharp brain.

What were the circumstances that led to the creation of the Taliban?

You can't create the Taliban, it was a spontaneous body. If you understand the psyche of the Afghan nation you will know. After the Russian withdrawal, (then Afghan leader) Najibullah's fall and the infighting of the mujahideen, an environment was created under which the Taliban was formed. I am not shy of accepting my link with the Taliban, but it is not true that I created it.

The Talibanis were foot soldiers of jihadi leaders. They were part of jihad and frontline troops who drove Russians out of Afghanistan. These soldiers went back to madrassas, but then they thought that the Afghans were falling apart and chances of normalcy would recede. Then, a young woman belonging to the Noorjai tribe was raped by some people in east Kandahar. And from there Mullah Omar took off.

Incidentally, (Taliban leader) Mullah Omar had never traveled to Pakistan. In fact, the Taliban movement began in defense of that woman. Mullah Omar was an ordinary mujahid. He collected only 40 people to start with. He said, 'tabrees (talim/study) haram hai.' And he started the movement. Rashid's book is a pack of lies. The Taliban was not created by Pakistan.

Part II: 'If India does not give us our land we will go to war'