Metropolitan magistrate Nivedita Anil Sharma rejected the bail application of Avnish Bajaj, CEO of Baazee.com, and sent him to judicial custody till December 24. 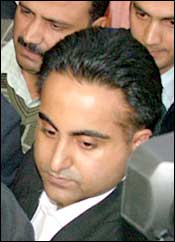 The special investigation team of Delhi Police's economic offences wing arrested Bajaj on Friday for contravening the Information Technology Act by allowing the controversial Delhi Public School sex clip to be put up on the site for commercial purposes.

A S Chandoke, advocate of Bajaj, argued that his client had not in any manner violated the information technology law and had, in fact, removed the clips from the site immediately after it was brought to his notice.

Nivedita, who heard the arguments of the prosecution as well as the defence, had reserved her order earlier in the day.

She rejected the plea of the accused and said that the defence could put up its arguments at the trail stage.

The magistrate directed the accused to be lodged in Tihar jail till December 24.