Even as the Diwali releases head towards theatres, a small and heartening romantic comedy has found many an admirer this holiday season.

Director Imtiaz Ali's Jab We Met is a charming rom-com, featuring Kareena Kapoor in an irresistible role that has gone down very well with critics and audiences, and Shahid Kapoor in possibly the performance of his career.

Raja Sen, professing his fondness for Imtiaz' first film, Socha Na Tha, caught up with the director. Here's what they talked about:

For me, what marks your cinema is your dialogue. Your characters speak like we do, and its immensely relatable. Have you always been good at writing dialogue?

Actually, I don't think I'm good at writing at all. I do it because I've always written whatever I've directed, and so I see it as a way to get to direct something. I've been in theatre for some time, and wrote everything I directed there as well.

In both films, your characters speak the same blend of credible metro language, a casual mix of Hindi and English and slang. Is this urban idiom something you are going to stick with, being obviously comfortable with?

No, I think it's just been a coincidence that my characters have been so 'city' so far. I don't think they're very rich -- or that it is a fact that affects the way they speak -- but yes, they are young, contemporary and I've tried to make them talk like you or me. I don't think they'd be overly dramatic or unnecessarily Hindi.

So are you only going to make city-bred romcoms? Not that there's anything wrong with a director who specialises in relatable romances.

No no, I want to do all kinds of films, depending on which story appeals to me the strongest. I've had a varied life, I come from Jamshedpur, I've lived in Delhi, Mumbai and a small village in East India. I've seen different kinds of life, and I want to use that in my cinema. I'm not going to label myself an urban director and stick to that. No way.

Exactly. Now your first film, Socha Na Tha, was very warmly recieved -- I loved and championed it thoroughly -- but not enough people saw it. What do you think went wrong?

Honestly, I shot that film over such a long period and there was so much uncertainty over the release that I couldn't care less, by the time it released. I was just praying that this film come out, even if it would be just on one screen in one auditorium and 50 people I invite could come and see it. It was quite a struggle.

You don't look back at it and wonder about the fact that maybe if you had known stars in the film instead of newcomers, it might have done better?

No, because I think it was absolutely necessary to have newcomers, the characters needed that. The character Abhay played, Viren, needed to be young but most importantly, needed to be unpredictable. And nobody had any preconception about Abhay, and he does that random unpredictable thing really well as a result. And we had to get a new girl also for the heroine, because she had to match him.

So do you think Abhay and Ayesha did well?

Oh, totally. I think they were brilliant. And so perfect for the characters. It was great working with them, and they're actors who give their all to the film. Actually I've been very lucky with actors overall, even with Shahid and Kareena. 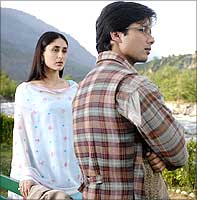 That's something I was curious about. Did you have a pair like that in mind from the start?

Well, no. Kareena I was sure about, we definitely wanted her on board. Shahid I had no idea about; I just didn't have an opinion of him. And then I met him, and I realised he's just what the character needed: an old man in a young man's body. He had the calm required for the role. So he read the script and was excited and asked me who I was thinking about for the girl, and I said Kareena. So he smiled and started dialling her straight away. Things worked out well.

What about Kareena? It's a breakthrough performance for her, and the character is irresistible.

I think she's always been a very strong actress. She's very confident and has a great presence on the screen, but she's the first real 'star' I worked with, so sure I was a little apprehensive. I'd heard the stories about her being difficult. But believe you me, she was delightful on the sets. I think both Ayesha and Kareena really gave me tremendous confidence by believing in me as a director, but Kareena just completely floored me with the faith she showed in me.

Looking at Socha Na Tha and Jab We Met, you have a knack of turning Bollywood convention on its head. You took a straightforward shaadi set-up, and then you took a DDLJ style missed-train set-up, and then went totally un-Bollywood.

That's a fair point, but I'm not going to agree. It was very unintentional. One of the few I-will-never-do-this decisions I made was that I would never make a film in reaction to an existing film. And so these films have been about the characters, and while I think the genre has seen a lot of films like these, they are completely original stories in themselves.

Isn't JWM a much more commercial effort than Socha Na Tha? It's more filmi, and it has these massive songs

(Grin) Yeah, I know what you mean. Songs did look seamless in the first film. And there are armies of backup dancers who look like backup dancers. But we thought let's go for it, thoda kholte hain, yaar. People enjoy it, and it is an entertainer. We are a country used to the hero bursting into song and a multilayered background score and chorus popping up out of nowhere, so let's enjoy that fact and have some fun.

[Note: The following questions discuss plot details from Jab We Met, so those who haven't yet seen the film might find SPOILERS below] 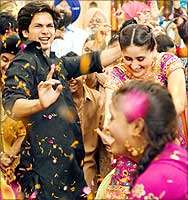 Jab We Met starts with Shahid almost completely mute for the first twenty minutes or so, and then post-interval, we have no Kareena for about the same length of time. Was this intentional? Also, was it a good move, considering how totally her Geet character was carrying the film?

It was a tough call to make, I can tell you that. As a writer and a director, I missed the character myself! And then I thought that it'll be nice if the audience misses her, and it will make seeing her later all the more special. And if you look at the film, right from the start, we've stuck to Shahid's point-of-view.  It's always been what he sees. So at the interval came the question of whether we stick with him or move to her point of view, and then we decided that it's more interesting this way, when Shahid and the audience are uncertain about exactly what's happened to Geet.

Now Geet is such an exuberant, hyperactive, indefatigable character. She believes everything will be okay, and plans to return home with [her boyfriend] Ashutosh and be accepted by the family -- which is clearly important to her. Do you think it really makes credible sense for her to ignore them for so long, and live alone -- based just on rejection from one guy?

Again, a tough decision. See, she wanted to go home and make everything okay, but not alone. She had pictured the kind of happy reception that she finally got in the film at the end when they thought she had come back with a husband. And about the rejection, she isn't the kind of girl who would take things lying down. She would have tried to plead, argue, pursue the guy for some time. And then the film in the beginning talks about how she lived in Mumbai alone in a hostel and her hostel life is mentioned a few times, so the idea of her living in a working woman's hostel doesn't seem that jarring if you think about it.

Are your characters a lot like you? Are the Geets and Virens and Aditis a part of who Imtiaz Ali is?