Black Friday is grim yet great

The 1993 Mumbai serial blasts hold a story that needs to be told, and Black Friday tells it well.

The grim tale of the conspiracy and the people caught in it is told with a refreshing candour.

A movie like this will always have two kinds of audiences -- those who lived in Mumbai on March 12, 1993 and those who did not. For those who were in Mumbai, it was a day when innocence was lost. It was the first time terror had struck in the heart of the city and though time has dimmed the memories, I think all of us who lived in the city then, still remember the fear we felt that day.

The movie begins with a bang as the cacophony of Dalal Street's hawkers and stockbrokers is stilled by the first of the 12 bombs going off at the Mumbai stock exchange. The terrifying silence after the explosion as the camera catches the blood-smattered aftermath sets you for a truly great reality cinema experience that rarely flags for nearly two and a quarter hours. 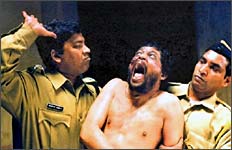 Kashyap uses his ensemble cast brilliantly, like a master puppeteer. So while Kay Kay Menon (as Rakesh Maria, the cop who led the investigation) and Pawan Malhotra (as Tiger Memon, the main accused) hog the limelight and screen space, it is the smaller characters populating the movie that give it its bestial undertones as well as its poignant moments.

'We shot the film with hidden cameras'

The filmmakers seem to have realised the dangers of retelling a story that is public knowledge. Hence the use of creative licence to airbrush the characters with shades of heroism or evil. Like Kay Kay who, while not squeamish about using third-degree torture methods, dunks his head in a bucket of water after a particularly brutal session.

The character of Dawood Ibrahim is sparingly used, but to good effect. Vijay Maurya bears a striking resemblance to the underworld gangster and adds a chilling dimension in a bit role.

Aditya Srivastava's character as Badshah Khan, one of Tiger's foot soldiers, is surprisingly well etched out. His journey from angry young revenge-seeking Muslim to an increasing desperate fugitive on the run, as he runs out of money and contact with his bosses in Dubai, makes for an good detour from the grim reality of the events unfolding in Mumbai. Kishore Kadam as the brutal torture-happy cop is frighteningly good.

There are other characters who pop in and out of the movie. The gangland lingo and ambience is stark and realistic. The cop house Mumbaiya and Marathi is designed to scare, and it does both to the accused behind bars and the people watching.

Kashyap seems to have mastered the use of cinematic tools and ruses. So there's grainy docu-style footage to show true events in flashback, and silences that are sometimes frightening, sometimes moving.

There are moments in the second half when the filmmaker seems to lose the vice-like grip by which he holds viewers but that's excusable since the film has to stay within the framework of its reality theme.

Mumbai's underbelly is superbly framed in all its grimy glory. So there are squalid slums, overflowing gutters and even a dance bar scene. 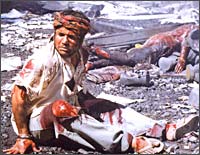 While the film stays true as a dark, brooding, evil tale, it is told with a droll, dry humour that brings a smile even as the protagonists head toward their final unforgiving denouement.

Slick production values lift the film. The action scenes showing the bombs going off are well done and the sound effects enhance the action.

So if you're a Mumbaiite go watch it and relive the fear. It may reopen old scars, but this effort is worth it. If your not, still go, it may help to realise how scared we felt.

This is good cinema and needs to be patronised.