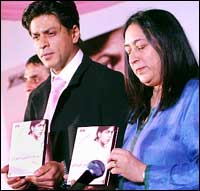 Nasreen Munni Kabir remembers Shah Rukh Khan's reaction when she pitched the idea of a documentary based on the star's life to him.

"His first reaction was why me?" says the British Indian filmmaker and journalist as she sits in the lobby of Manhattan's Radisson Hotel, to talk about her two documentaries The Inner/ Outer World of Shah Rukh Khan. "Am I important enough to make any difference?"

And in The Inner World, the first of the two films, Kabir shoots a similar scene where film journalist Anupama Chopra (wife of filmmaker Vidhu Vinod Chopra) pitches a book project to Khan. "I am honoured, but when I first told Gauri (Khan's wife) that Anu wants to write a book on me, she said, 'Are you mad, who will read it?'" Khan says in the film.

Kabir choose Khan as a film subject because she felt that the actor had brought a distinctive change to the Hindi film industry. Quite in the same way as Shammi Kapoor changed the way young heroes were perceived or the impact that Amitabh Bachchan, Lata Mangeshkar or Guru Dutt had on the industry.

"Shah Rukh is definitely a man who has taken Indian cinema to the next level," says Kabir, whose documentary subjects have ranged from Guru Dutt, Bismillah Khan, and the staging of Bombay Dreams and next year's The Lord Of The Rings in London. "Shah Rukh is still in the middle of his career. In his case it is happening now, so you can record right now how is he is behaving."

do not analyse Khan's film career. Instead the two films explore the inner thoughts and the life of Khan, and how the actor and the star in him try to stay honest and earnest, with a constant desire to sound humble.

"Bahut sharif aadmi hai yeh (He is a very straight guy)," she says about Khan. "He doesn't push his weight around. He loves his stardom and his connection with the audience, but he doesn't misuse his power. He has the world at his feet, but a lot of people have the world at their feet by hook or crook."

Kabir's assessment of the reason why Khan is honest and stays real is that he is a product of an educated middle class family. "The man has certain amount humility in public situations," she adds. "He often says, 'Oh if I say this, I may sound pompous.' He is very aware of how he is projecting himself."

What keeps Khan grounded is his work, Kabir says. With all the stardom, fame and money, ultimately Khan gets up in the morning and goes to the set and he works. Making films is a job for him.

"He enjoys stardom, but he remembers the days when he did not have the stardom," Kabir says. "He excelled in school. He had a humble middle class life in Delhi. But he always had a charisma, not because of the movies, but because he is who he is."

There was an incident in Khan's life that he recalls a couple of times in the two films. When he was young, he had approached Pakistani cricket player Imran Khan for an autograph. Imran brushed him off. That stayed with Khan and so no matter how tired he may be, he is always willing to oblige his fans for autographs and pictures.

The world of Shah Rukh Khan

"I remember Amitabh Bachchan said to me when he was young, he was in a restaurant with his parents and he saw Dilip Kumar," Kabir says. "He asked him for an autograph and Dilip Kumar refused. Aisa hota hai."

But sometimes the fans really start to test Khan's patience. "I have to say middle age women are the worst behaved," Kabir says as she talks about the October 13 event in Jackson Heights, Queens, when hundreds of Khan's fans were turned away from seeing the star, who was making a public appearance to mark the DVD release of The Inner/ Outer World. "They were pushing much more than the teenagers. There was a woman, who got him to sign her DVD, and then she had him sign a piece of paper, but she wouldn't move. They (the event's organisers) didn't let more people in because some of these people were not moving."

The reaction of the fans to their favourite star has much to be the reality of life in the West, Kabir says. The Outer World is packed with thousands of screaming fans in the US and UK, as Khan performs with his co-stars on the 2004 Temptation tour. "The younger generation that lives here, they see their peer group -- the Americans or the Brits and they see there is a lot of screaming and boisterous behaviour when it comes to rock stars and film stars."

"So they are reflecting that kind of behaviour and it is intensified because here, they see Shah Rukh only once," she adds. "They are not living in Bombay so they can't just happen to see him any time. In India, you have Indian life all around you. But here you have pockets of Indian life, and Shah Rukh is in one of those pockets, in the imagination about what India is, what romance is, what good looks are."

There is another reason why the fans in the West act so maddeningly crazy, Kabir says. "There is a culture now that if you pay the money and buy a ticket, then you own these stars. That the stars owe them the attention."

Khan watched the finished version of The Inner World with Kabir, while he was on the sets of Ashutosh Gowariker's Swades. He obviously liked the film and so he decided to produce the second project, The Outer Life. Later, Kabir sat in Khan's home and watched the second film with him.

"He was very quiet. Then, he thanked me and said 'Oh it is very nice,'" she says. "He said, 'I want to give you hug,' which he did, and that was the end of the story. We started taking about other things."

"But it is interesting that I have been working on this industry for 25 years. Privately they (the stars) have been encouraging, but he (Khan) is the first one to publicly acknowledge my work. Movie stars are sometimes so full of themselves they don't even realise you are in the room. For Shah Rukh to do that, I thought it was very generous."