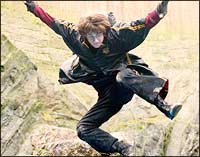 A book is almost always better than its movie version. There are exceptions  The Godfather springs readily to mind  but they are just that: exceptions. And to try to put a global bestseller series to reel is a daunting task, to say the least.

That is why Mike Newell, the director for Harry Potter And The Goblet Of Fire, must be given a pat on the back.

He has crunched a book as thick as a brick to a little less than two-and-a-half hours without losing a lot; he has given characters mannerisms that go a long way in making them memorable; he has put some ingredients of his own to add to the delicious brew of J K Rowling's unputdownable books.

And, he has made no concessions for Harry Potter illiterates who don't know their polyjuice potion from veritaserum.

The film begins the way the book does, with Harry watching in a dream as Lord Voldemort kills a man who intrudes into his plotting revenge on the Boy Who Lived. But then on, the movie skips most of the setting up of the plot, and deals with the Quidditch World Cup in just a couple of special-effect laden, gravity defying scenes.

The no-beating-around-the-bush pace continues with the majestic entry of the Beauxbaton and Durmstrang teams for the Triwizard Tournament  a sort of Olympics between three schools of magic.

Alastor 'Mad Eye' Moody (Brendan Gleeson), the new defence against dark arts teacher, is almost what you visualise from the books, complete with a roving, magical eye.

What Newell and Kloves have dealt with in detail, and with lovely humour, are hormones. Parvati Patil to Harry Potter: 'Put your hand on my waist.' Harry: 'Where?!'

But the way Harry's first crush is portrayed is a tad disappointing, in terms of screen time and chemistry. Cho Chang (Katie Leung) doesn't seem as pretty as you would imagine her to be, considering the 'dishy' Cedric Diggory and Harry Potter are both vying for her attention.

The Triwizard Tournament scenes  dragons and all -- are quite spectacular. You almost feel the adrenalin rush you do when you read them.

The climax, when Harry faces his nemesis, the evil Lord Voldemort (Ralph Fiennes), is what you expect it to be, almost. I guess there are limits to how scary you can be while making a children's movie. And if you haven't read the book, you will not understand why Harry survives, again.

In the acting department, Daniel Radcliffe seems Harry Potter enough and all the others are competent. But the one who really stands out is the rock star-ish longhaired Rupert Grint as Ron Weasley. There's quite a chemistry between him and Emma Watson, who plays Hermione Granger.

The best part about the Harry Potter books is the inherent humanism in a magical environment. They are more about growing up, about friendship, love and all the little things that make a big difference than about spectacular spells and enchantments. The three Harry Potter movies before Goblet Of Fire fell woefully short on that count.

And while Goblet Of Fire comes closest to Rowling's magic, it still does not match up to the emotional quotient of the books. You want to have more moments like when Hermione Granger (Emma Watson) asks in the end, half an eye on Ron, 'So, everything's going to change now, isn't it?'

Also, there is one tweaking of Rowling's pen sketches every Harry Potter fan will take umbrage at. Professor Dumbledore (Michael Gambon), the only wizard Lord Voldemort fears, is too animated: Newell's Hogwarts headmaster is often shouting, getting angry and flustered.

And that is like a James Bond who bites his nails.

The other rant Potter maniacs will have is that Fred and George Weasley, undoubtedly two of Rowling's finest characters, continue to be under-developed, despite some very fine acting by James and Oliver Phelps.

These little big disappointments apart, Goblet Of Fire does what every Harry Potter book does: make you want to revisit it, soon. Maybe because most Potter fans have hitherto reconciled to the movies being as bad as the books are fabulous, but Goblet Of Fire is definitely the best Potter film yet.

So, if you meet Mike Newell or Steve Kloves, please treat them to Madam Rosmerta's oak mead. You can mail me the bill.

Have you watched Goblet? Mail us your review!