'Aamir wanted to be a director!' 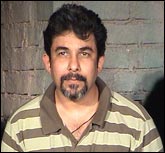 Deepak Tijori was Aamir Khan's senior in college, and the two have worked in five films together. As Aamir turned 40 on March 14, Deepak spoke to rediff.com about his co-star and buddy.

"I have not worked with Aamir for some time now, but we worked together when he was still very actively trying to make his foothold in the film industry. I've known him for 20 years.

I have always felt he has been very sincere and clear in his mind about what he wants.

It was interesting working with him. I had worked with him when he was playing the lead in Afsana Pyar Ka. I played a friend's role. He had just finished Qayamat Se Qayamat Tak. I was wondering what it would be like because he had become a big star by then. But there wasn't any major change.

I also worked with him in Jo Jeeta Wohi Sikandar, and learnt that it was he who had recommended my name to the director!

I realised he was not one of those guys who would probably go out and talk about it. He does his work silently and he believes in doing it professionally. Even in Ghulam he had recommended my name, and he had asked me to meet [director] Vikram Bhatt. I have seen him growing, and I am very happy. I feel good for him.

He is one of the most sincere actors we have. He gets into the skin of the character; he lives the characters he plays.

I remember, in Jo Jeeta Woh Sikander, he was playing the cyclist and was actually turning into one! He used to have races with the national champions -- he had become that good in cycling! He would cycle from his home to the shoot, and then from Bandra to Juhu.

He would practise a lot. He would carry his bicycle on the roof of his car, and cycle home after the shoot. The car would follow him. That was his sincerity level!

He is very genuine. He doesn't believe in backbiting. He is a very clean man.

We didn't go out too much, as he was never the going-out type. He was very professional. Besides, he married too early in life, so he was involved more with his family.

During our college days, we would do amateur theatre. I was his senior. I passed out, and he took on the theatre circle. He would always be on time for rehearsals and practice. He was always into filmmaking, acting and stuff like that. He did not want to be an actor; he wanted to be a director. But I think he changed [his mind] because he became successful.

He started acting in movies while he was in college. He starred in Ketan Mehta's Holi. I was more into extracurricular activities. But we were from the same group. Even Ashutosh [Gowariker] was from our group. After college, we started meeting more often as I also started joined the industry.

Aamir plays pranks on the set. He enjoys himself; he is not as serious as he seems to be. He's very jovial. I don't remember any particular pranks but he used to do a lot of things on the Jo Jeeta sets. We would play around with Ayesha [Jhulka] and the rest of the cast. It was fun being with Aamir on the sets!