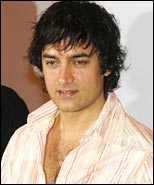 Aamir Khan, one of Bollywood's most popular actors, turns 40 on March 14

To celebrate the occasion, we asked readers to tell us about that one ecstatic moment when they met the man himself. We have received a lot of exciting stories, and present some of them in the first of what we hope is a multi-part series:

It was on a flight from Mumbai to Banglore just before Aamir had gone to the US to promote his Oscar-nominated film, Lagaan. I was thrilled to see Aamir on the same flight as me.

Of course, he had a seat in Business while I was in Economy. So like the other passengers, I just looked at him. I decided to talk to him and get his autograph once the flight landed.

After landing and disembarking, I could not see Aamir anywhere. I walked to the men's room. Once I was done
and turned around, I saw Aamir standing behind me in the queue waiting for me to finish so that he could step in! It was a treat for my eyes to see him from that close a distance.

That was not the right time to ask for an autograph or talk to him. But I still remember the tryst with Aamir Khan in the
strangest of all the places -- the men's restroom!

I have been lucky enough to have met most actors in our country up close, although I have nothing to do with the film industry. But I found this meeting with Aamir Khan the most fond and cherished moment of my life.

It was way back in 1996-1997, when I was passing time driving in my modified Gypsy with my friends.

A white Esteem passed us from the opposite direction with the glass rolled down, and my friend yelled to me "Aamir! Dekh!"

I took a U-turn immediately, and started chasing the car. We stopped side by side at a signal and to my surprise, Aamir calls out to me and says, "Fantastic music system!"

I had removed my telephone diary and a pen and asked him for an autograph. He took it but the signal turned green. Aamir told me, "I am stopping at Birdy's. Collect it from there."

Outside Birdy's, Aamir was sitting with son Junaid on his lap. I held my hand out to Junaid and said, "Hi Junaid!" But he did not respond.

So Aamir told him, "Junaid, koi agar haath aage badhkar bole to uss ke haath milana chahiye aur hello bolna chahiye. [If someone extends a hand, one must shake hands and say hello]" Then he turned to me and said, "By the way, it's his birthday."

I shook Junaid's hand and wished him, and this time, I got a positive response. I got Aamir's autograph.

I was heading back towards my car when Aamir said he had signed on the last page of my telephone diary, and that he would redo it under A if I wanted. But by then, the tow truck had arrived, so I had to rush.

My Aamir Khan encounter was when I was in school, maybe in Class 7.

Aamir was shooting for a movie (I think it was Ishq) in my school, Lawrence School, Lovedale, Tamil Nadu.

I saw him standing on the lawn. Surprisingly, there was not many people around. I went up to him and gave him my notebook so that he could sign an autograph. He asked me for a pen but I did not have one.

So he walked down to someone himself and borrowed a pen and signed his autograph me!

I thought that was really cool.

Starring Aamir Khan and me?

I saw Aamir Khan really up close when he was shooting for Akele Hum Akele Tum, in Juhu, Mumbai.

I was going to work, when I found the area near the Pushpa Narsee Park blocked with people. Some guys were stopping people from moving around where Aamir was supposed to enact a scene. He had to run with his son in his arms. The son was supposed to have got hurt while playing in the park. Aamir had a orange shirt and blue jeans on.

I almost shouted at the guy who stopped me from blocking my way. I was late, so was not interested to know which shooting was going on. But I was pleasantly surprised that when I started walking, Aamir started running from the other end into the traffic with the child in his arms. I would have almost appeared in the scene, except that a taxi passed between him and me, as he ran past me.

I am a Canadian Indian from Toronto, Ontario. In 2001, just after the terrorist attacks, Aamir was on a world tour to
promote Lagaan and the Toronto film festival was an obvious stop.

I was in school at the time studying in Ryerson University. The campus is close to the theatre where Lagaan was being
screened. So I decided to watch it with a friend. I didn't really love the movie but I did consider it a brave effort.

As we left the theatre, there he was -- one of India's greatest stars standing with his wife Reena Dutta (who, by the way, looked gorgeous). He looked shy and when he noticed that the two of us had recognised him, he shook our hands. His wife was polite as well. Also accompanying him was the director of Lagaan, Ashutosh Gowariker. Not many people recognised Aamir that day as the density of Indians in the theatre was quite low.

My first impression of Aamir was that he was short but fair. My friend loved him. The meeting lasted about ten minutes and we left with a couple of pictures.

The same year, we met Shah Rukh Khan for the screening of his film, Asoka, and few other Indian actors. But I can honestly say that Aamir seemed the most down-to-earth.