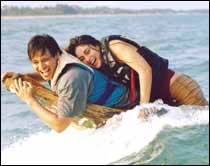 The average of Mani Ratnam is also the best of the Hindi film industry. That's the way I would describe Yuva.

Considering Mani Ratnam's earlier masterpieces, Yuva is certainly low on substance, but Mani is absolutely in his element with his impeccable style of painting his frames. These make Yuva a good piece of cinema.

Yuva represents half a billion Indian people whose ideas shape the ideals of tomorrow's India. Mani classifies them into: the Ram Gopal Varma-ish (Satya) Lallan, who is on the wrong side of the law, and knows only one rule of
life: Live life kingsize by hook or by crook.

The revolutionary Michael, is the change agent of the degenerating socio-political fabric and believes: If it is to be, it is upto me.

These are the X, Y, Z axes of the graph called Yuva, heading in three different directions.

All of us can map ourselves somewhere on the graph, and that is the strength of Mani's characterisation.

The opening shot: Lallan, Michael and Arjun run into each other's lives accidentally. Their origin is Kolkata's Howrah Bridge. And this boomerangs into an episodic flashback of their lives (and their girls).

It also sparks off a series of events that lead to a very expected normal ending -- the victory of good over bad.

The ending shot: Lallan is in jail. Michael and Arjun are the new jeans-clad MLAs representing the future of Bengal (and India).

This very unlike Mani Ratnam ending only leaves you asking for more.

The theme of unleashing the spirit of youth and making a statement to them loses steam with too much of everything. But the unmistakable freshness of Mani's screenplay keeps the narrative from degenerating into a three-story, one-ending Darna Mana Hai narrative.

Ravi K Chandran's camerawork and Sreekar Prasad's editing oozes energy of the youth into the film.

The songs certainly slow the pace of the film. But it is always a tremendous feeling to experience the A R Rahman-Mani combination.

Ajay Devgan as Michael is as good as ever, but is the same angry young man.Vivek Oberoi is his usual Saathiya yuppie self.

But Abhishek is the real scene stealer, with an incredible performance, whether it is his walk or talk or look. He is splendid as the Lallan of the masses. Another scene stealer is Om Puri as Bengali Babu, proving his credentials yet again.

The one-and-only Mani Ratnam  -- that's what people like me and so many others call him for his incredible ability to balance style and substance --  has this time not struck a perfect balance.

Otherwise, it is definitely worth going for Yuva and plotting yourself on the Yuva chart and calculating your YQ (Yuva Quotient).