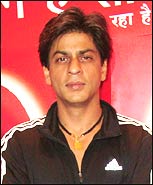 Shah Rukh Khan recently quipped that he felt 'like a monkey' out to entertain movie buffs!

"I am like a monkey who dances to the tunes of the director, producer and script writer, to entertain cinegoers," Khan says. The actor is presently in Jaipur with Sushmita Sen to launch Tag-heuer sports watches.

"I even dance in my bathroom in front of the mirror!" Khan exclaims. "I want to make people happy, whether it is in marriage parties or stage shows. Acting is my job, though I do satisfy my passion."

His last release Veer-Zaara, a love story of Indian Air Force officer and a Pakistani girl (Preity Zinta), is a hit in India and abroad.

Khan claimed that he would love to go to Pakistan to help further friendly relations between the two countries. "I am patriotic and believe in Indian values and traditions. That always reflects in my performances." he says.

The actor, who will also play a polo match in Jaipur, adds, "I have not played polo [before]. I've always played hockey. I learnt that from my father."

Khan's next film, Swades, will release on December 17.
Source: PTI© Copyright 2020 PTI. All rights reserved. Republication or redistribution of PTI content, including by framing or similar means, is expressly prohibited without the prior written consent.
SHARE THIS STORYCOMMENT
Print this article