Introduced to cinema by Raj Kapoor; groomed by Mehboob Khan; Dilip Kumar's costar in five films; directed by K Asif in her swansong, Nimmi blazed bright in the 1950s when she worked with talented legends. 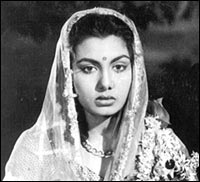 Blessed to be part of Bollywood's golden era, Nimmi honed her histrionic abilities till she evolved a mildly mannered but highly individualistic style of performing for which she found a loyal fan following. With her saucer shaped, expressive eyes, the diminutive actress had a powerhouse impact.

Nimmi was one of the fortunate few to break into films with a superhit like Raj Kapoor's Barsaat (1949). Though Barsaat's director and star Raj Kapoor had cast Nargis in the film, he gave Nimmi a memorable role as the pure-hearted young girl pining for the love of a city slicker (Premnath). The film's title song Barsaat mein humse mile tum (besides chartbusters like Jeeya bekarar hai and Patli qamar hai) picturised on Nimmi well as the climax revolved around the newcomer.

Innocence was the calling card of the pahadi character Neela that Nimmi played in Barsaat. The shy, teenaged Nimmi fit the role like a glove. She had come to Mumbai from the small town of Fatehabad, Uttar Pradesh, only the previous year to meet her mooh bola uncle Mehboob Khan with whom her mother Wahidan had acted in a few 1930s films.

Raj Kapoor decided on Nimmi for Barsaat after watching her guileless animation as a guest on the sets of Mehboob's Andaaz. This dew fresh appeal resulted in Nimmi being flooded with films after Barsaat, in many of which she was cast as the trusting village belle.

Soon, she was working with heroes like Raj Kapoor (Banwara), Dev Anand (Sazaa, Aandhiyan) and Dilip
Kumar, with whom she formed a hit team after the success of Deedar (as second lead to Nargis) and Daag (as heroine).

After Andaaz, Mehboob Khan cast her in his next magnum opus Aan (1952) where she played a sweet, rustic belle in love with Dilip Kumar who, in turn, is enamoured by a fiery princess (Nadira). Nadira's brother Premnath lusts after Nimmi's character Mangala. Though Nimmi dies before the climax, she does an elongated death dance that captured the imagination of the public. Notwithstanding the many other multi-hued characters in this early colour film, the wide-eyed actress made waves with her effective portrayal of virtue under siege.

Aan had a lavish London premiere and the press raved about Nimmi as the unkissed Indian beauty.

In her films, Nimmi played the victim repeatedly and so well that Mehboob Khan asked her to portray injured innocence once again in his next film Amar (1954). Nimmi played a poor, rural girl seduced by a rich man (Dilip Kumar). Frequently using her eyes and hands while acting, Nimmi convincingly put across the mingled strands of anguish, love, disappointment and a desire for sacrifice.

Nimmi's heart-rending hyperventilating contrasted well with Madhubala's resigned serenity as they contemplated the weak-kneed man they both had the misfortune to love.

In Udan Khatola (1955), her last film with Dilip Kumar, she got a chance to dress up as a man for a while, but soon major sacrifices were characteristically demanded from Nimmi and she agreed to put her life to risk to the tune of O door ke musafir.

Nimmi was seductively spry in her two successes in 1956 in two hero-oriented films -- Basant Bahar and Bhai Bhai -- notable for her Lata-vocalised songs. Thereafter, the long-established actress decided it was time to be choosy about her films. As a strategy, it did not prove strikingly successful for Nimmi. She even opted out of B R Chopra's memorable Sadhna because she did not want to play a mercenary prostitute.

In the late 1950s, Nimmi did good work intermittently with renowned directors like Chetan Anand (Anjali), Vijay Bhatt (Angulimala) and K A Abbas (Char Dil Chaar Raahein). In the last, Nimmi deftly played a dancer who turns down a nawab for his driver (Ajit) but eventually spurns him when he refuses to accept her mother.

With the advent of new heroines in the 1960s, Nimmi's career went under a cloud. The actress had been a major fan of Ashok Kumar in her childhood days but had never been paired with him romantically despite costarring with him in films like Deedar and Bhai Bhai. She was overjoyed to be part of the blockbuster Mere Mehboob as the dancer who is on a lower social rung than her lover Ashok Kumar.

Director K Asif had started Love And God, his version of the Laila Majnu legend, even before completing his tour de force Mughal-e-Azam. He finally zeroed in on Guru Dutt as Nimmi's costar in the film and shooting got off the ground. This was to be Nimmi's claim to eternal fame courtesy the director who immortalised Madhubala.

Unfortunately for Nimmi, Guru Dutt's death put a brake on the film's shooting. Sanjeev Kumar was chosen as his replacement but disaster struck when Asif passed away.

Nimmi had stopped doing films for almost two decades when Love And God was finally released in the 1980s in a compromised form, a shadow of what could have been.

Today, Nimmi lives next to her beloved Mumbai seafront in Worli with husband, writer Ali Raza.