'Current infrastructure not enough for 9% growth'

These were some of the pointers given by Boeing, Senior Vice-President, Sales, Dr Dinesh Keskar at the Asia Society Conference on Monday.

"India can't be open to business unless it addresses its infrastructure issues," commented moderator Marcus Wright, senior editor, Asia Pacific,Dow Jones Newswires, at the beginning of the session. 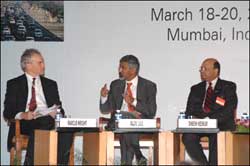 India invests 3.5 per cent of its GDP on infrastructure which was much less than China, said Lall whose company finances infrastructure projects in India and who has worked with the World Bank.

On the pace of infrastructural reforms, he said there was no socio-political theory of reform in India. "The impulse has relied on leadership, specially technocratic, for example in telecom. It is very important for competition to come in at the second stage, only then can consumers taste the benefits of policy change."

Deeming India on the cusp of change in a variety of infrastructure, he felt the glass was half full.

Till ten years ago, there were only two airlines in India. In the last three years alone domestic air travel had increased by 25 per cent. There were 150 more planes in the pipeline which only made him feel that airport privatisation should take place quickly.

Explaining the change in demands of the people, he said a strike by airport staff five years ago would have succeeded but not any longer because the consumer had tasted the benefits -- and just like better roads -- the consumer wants more.

'Business with India is always rewarding'

Lall said the power sector was lagging behind and the government had difficulty in getting out of its own way. An overhaul of the distribution system was required, state electricity boards had to get into shape and facilitate an open access between the provider and consumer.

"The current pace and momentum of infrastructure growth is okay for a 7 to 8 per cent growth rate but not sufficient for 9 to 10 per cent," said Lall.

On the quality of infrastructure, he said in telecom, hotels and some new roads -- it was world class.

Answering a query on corruption in getting large infrastructure projects through, Lall and Dr Keskar both felt the system had become more transparent.

"India understands if it is to make a mark internationally it has to get rid of these issues," said Dr Keskar.

Archana Masih in Mumbai
SHARE THIS STORY
Print this article