'Politicians know I cannot be maneuvered' 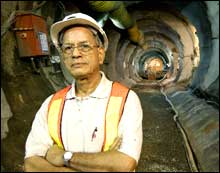 There were at least six Indian tourists at the ticket counter buying tokens for a ride last week at the Central Secretariat metro station - all in for a joy ride on one of Delhi's leading attractions -- the Delhi Metro.

With over 80 per cent of the project completed, the swanky air conditioned trains and modern stations are changing the transportation system in the nation's capital city. Costing Rs 10,570 crores (Rs 105.70 billion), the project is expected to save Rs 600 crores to Rs 700 crores (Rs 6 billion to Rs 7 billion) on the total cost and more importantly, is slated to be completed on time.

The man behind this accomplishment, Elattuvalapil Sreedharan, 74, is a disciplined, simple man who calls himself a 'railway man' with 36 years of service in the Indian Railways.

Lauded for achieving the 'almost impossible' in a government-administered system and given extensions by the government after his retirement in 1990, Sreedharan comes with a reputation of bringing fantastic results.

In an exclusive interview to rediff.com Assistant Managing Editor Archana Masih, he spoke about what went into building the world class Delhi Metro, his run-ins with politicians and his style of working.

The Delhi Metro is seen as a transportation system that perhaps many did not expect to be so modern, efficient and be ready so soon. What does it mean to you to be the mastermind behind this success story?

The government entrusted me with a certain job and I have been able to perform that job well I should say. There is a satisfaction of having done that job very nicely, well in time and achieved it well within our project cost.

I view it nothing more than a part of my duty.

Does it in any way burden you with more expectations from the people?

I know people are expecting more but that is natural and I welcome it because only then we can improve. Unless those expectations are there -- criticisms, drawbacks -- there are people who point all this out. They are welcome because we want to improve further.

What is the criticism you receive?

Basically that people are not disciplined in boarding and getting off the train. Before people get into the train, there is a tendency to get in - this is one criticism. We have been trying to educate the people but we can streamline it more a little later when our signaling system is fully completed.

We have an automatic train stop which is still not commissioned in the system, when that is commissioned the train will stop exactly at the correct stop and we can mark lines for people to queue. We expect this to be completed in two months time.

There is also some criticism about the delays that take place due to security checks at the metro stations. Every person is frisked which delays people and they don't like it. It is a source of irritation.

The third area is actually not in our domain. Very often people say the roads leading to the station are dirty, people are answering calls of nature on the walls -- so these sort of complaints also come to us because people think if it is brought to our notice, we will do something about it.

Because we perform well, people have high expectations from us. They are not able to visualise the demarcation between us and the other agencies.

Since the Delhi Metro is a public facility, shouldn't there be toilets for passengers at the metro stations?

For Line 1 and Line 2, there are toilets for staff but for line 3 we have toilets for the public at every metro station. We did not do it for Line 1 and 2 because we followed the normal international practice where toilets are not provided on every station.

Our theory is that a person is in a metro system only for a maximum 12 to 15 minutes only or 20 minutes before he/she completes the journey. So public toilets are provided just outside the important train junctions. That was why we did not provide toilets.

Later on we realised it was not good for the city. I mean we are serving the people, let us serve the people fully well. So we have provided toilets in Line 3 and hereafter all the lines will have toilets for the public.

The general experience in India is that toilets are not properly cleaned, maintained, we didn't want this to happen in our stations so initially we did not encourage it. But now we find that people have started respecting the system, they don't dirty it. Moreover, the toilets for staff can be used by the public during an emergency.

In fact, I got a letter from a man appreciating the help by a staff for this.

Do you get a lot of letters from the public acknowledging your work?

Yes, quite a lot. Now everyone who comes to Delhi, the metro has become one destination to visit. They travel and carry back nice memories of the metro system.

You headed the Konkan Railway project -- another rail system built on a very difficult terrain and now the Delhi Metro. In your personal graph where do you rate these two achievements?

These are really two different cups of tea. Konkan Railway was a familiar ground for me because I am a railway man. I spent 36 years in the Indian Railway. Of course, the Konkan Railway was a very, very difficult construction. So it was a continuation of my railway service, really speaking.

But the metro is entirely different. Here the technology is different, work was to be done in the capital city, under the directive of very, very important persons. Anything going wrong there would be questions, the Parliamentarians are also watching -- so the responsibilities are a lot different here and technology is also very complex.

The metro is a very complex thing. This is an entirely different experience. Between the two, I feel this (the metro) has got much higher demand on my resources.

Both have been quite satisfying in their own way. Of course, the Delhi Metro has given more satisfaction. No doubt.

You are known as one who has brought in a corporate culture in the Delhi Metro office. After being in the Indian Railways from 1954 that is part of the government machinery known for its babu work culture, where did all this discipline, efficient style of working come from?

This management style that I have adopted in the Konkan Railway and Delhi Metro are not different from what I was practicing in the railways as well. There also I was doing the same in my own small field -- punctuality, commitment to work, motivating people around me, rewarding them, completing tasks before time. This was in my blood in the railways also. It is an extension of that service, the only thing is that there it is a government department. It cannot shine out very much and I was not the chief executive.

When I came to the Konkan Railway, it was the same thing carried forward and unfortunately all the credit came to me, instead of the whole team. The Delhi Metro is also the same. It is a team work ultimately -- of the Delhi Metro staff, consultants, suppliers, contractors -- unfortunately the whole credit seems to be coming only to me.

The management style is the same, I haven't changed much from those days to these days. The only difference is here I had little more freedom for taking decisions.

Did your achievements shelter you from the pressures somebody in your position would have been subjected to in the Indian system?

Yes, to a large extent that is true. But in the railways also I had the same reputation -- for honesty, integrity, fearlessness, getting things done fast. There was also great demand on me from various organisations. That reputation has definitely helped me. I could stand up to many outside pressures.

What kind of outside pressures?

There were very many. For example, awarding contracts, pressures can come.

Political pressures. In recruitment. We had to recruit many people. Then a lot of pressure used to come for promotions in the organisations. The main areas were contract awarding, staff recruitment, land acquisition -- when you decide on a particular route and try to acquire the land, politicians immediately want you to shift the alignment, 'why don't you save this shop? why don't you save that house?' -- this sort of thing used to come.

But we never changed any decision simply because somebody wants it. If it was required technically or from a professional angle, yes, we do it. Not because anybody wants it.

They want some people to be appointed and I don't. Similarly contracts. I do exactly what is required. That way politicians know I cannot be manouevered or managed that way. But now I have seen that they respect these qualities.

India open to engaging with Nepal over boundary issues