The holy magic of Rewalsar

Rediff reader P Sunder tells us about his visit to Mandi and the Rewalsar Lake in Himachal Pradesh.

Mandi, in Himachal Pradesh, is also called the Kashi of the hills for its large number of temples. There are 81 beautifully carved temples in and around Mandi. Notable among them are the Trilokinath temple, the Bhootnath temple, the Panchavaktra temple and the Shyama Kali temple.

We arrived in Mandi around 4 pm after a nine-hour drive through the plains of Punjab, and the climb up the hills from Kiratpur Sahib. The weather was good, and there was the added excitement of Dussehra in the towns that we passed.

We stayed at Hotel Mandav run by the Himachal Tourism. A good place to stay, it provides a vantage view of the town as well as the Sports Centre ground where the main Dussehra function is held every year. The crowd swelled as the Ram Leela procession made its way to the ground from across the bridge on the river Beas.

We first visited the Tarna Devi or Shyama Kali temple dedicated to Goddess Kali, situated on a hill about 5 km from town. A first-time visitor may have difficulty finding the place due to the lack of proper signboards. I hope the concerned authority does something about this.

The temple visit of course was a joy. Situated at the centre of a large courtyard/ park, the sanctum is covered with precious metal sheet inside the dome where the impressive statue of Ma Kali inspires reverence and awe.

For those interested in shopping, the Indira Market-Square in the centre of Mandi town is worth a visit.

We headed for Rewalsar, about 30 km away, early next morning. Schoolchildren, waiting patiently for a bus, giggled excitedly on being asked to pose for a group snap. The road winds around several hills and offers a splendid view of the valley. The hills were lush green, covered with rows of pine trees and bushes.

We entered the town and drove through an arched gate and were suddenly facing the lake. Welcome to Rewalsar!

My first thought was that the lake was bigger than I had imagined. There was a motorable track all around it. Colourful flags added to the magic. There was a distinct Buddhist ambience and monasteries could be seen close to the lakeside.

Our first stop was the temple, outside which is a statue of the Nandi bull in an upright posture. Close by is another temple with the impressive figure of another Nandi in black. 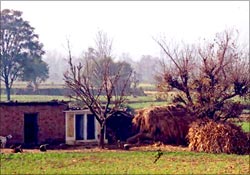 A couple of steps down the road and we were on the lakefront. We were a little disappointed to find the water a deep green. We saw many visitors feeding flour balls and biscuits to the hundreds of fish, jostling and swimming. Their fins swishing in the water added to the cacophony created by excited kids.

Later we walked through a narrow lane with several shops on both sides selling Tibetan and Nepalese souvenirs. Cheerful Buddhist monks clad in maroon went about the place, rotating the mani in meditation.

The newly constructed temple of Padmasambhav was close to the lakeside. The huge bronze statue in a seated posture looks truly impressive, with a kind, smiling face, wide open eyes and eyebrows raised sharply at the ends.

The right hand was stretched in the prayer mudra while the left held a staff with symbolic heads. As we stood in admiration, several devotees offered obeisance, bowing their heads, kneeling and then stretching in respect. Lamps with ghee as well as powered by electricity added to the charm of the place.

The Nyingmapa monastery (pronounced Ning-ma) was a delightful sight. A splendid combination of maroon, yellow, red, white, blue, and black formed the facade of the three-storied construction.

Traditional Buddhist symbols, including dragons, were organized in symmetry. This, I thought, was Buddhist art at its best. The huge arch near the entrance, no less impressive, proudly announced 'Guru Padmasambhav Mandir' in Hindi. Huge, traditional prayer wheel-drums were placed all round the monastery along the path of pradakshina.

Inside the monastery, on both sides of the aisle, were seats for the disciples to pray and meditate. At the centre of the hall was a huge figure of the guru in bronze. Lamps and incense added to the peaceful and holy atmosphere.

"This mani will bring great luck," said the Tibetan shopkeeper as he opened the lid and showed the prayer scroll. "Your family will enjoy great happiness." With a flourish, he swung it and smiled.

He had already been proved right; we were lucky to have visited Rewalsar. 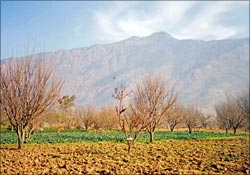 By air: The nearest airport is Bhuntar, 63 km.

By rail: The nearest broad gauge railhead is at Pathankot, 210 km.

From Pathankot the narrow gauge railway connects Joginder Nagar, which is 55 km from Mandi.

Have you been to Mandi and/or Rewalsar? What was your favourite sight there? Where did you have the best meal? Do you have a hotel to recommend?

Do post details on the message board below so other readers can benefit from your advice. Remember to add information on what was special about the restaurant, hotel or sight you visited, along with relevant telephone numbers and addresses.

Want to visit Shirdi?
SHARE THIS STORYCOMMENT
Print this article